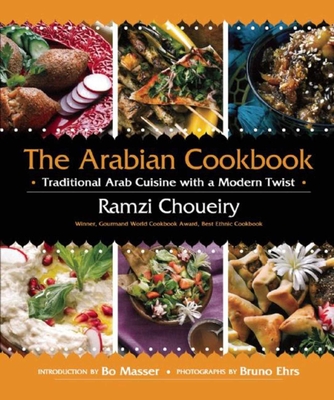 World-renowned chef Ramzi Choueiry revolutionized Arab cuisine and raised its standards on the international culinary stage. Known for being Lebanon’s first television chef and always having a bright smile on his face, Chef Ramzi now shares his finest and tastiest recipes in The Arabian Cookbook, which combines traditional dishes with a personal twist. With an introduction by Swedish chef Bo Masser and exquisite photographs by Bruno Ehrs, this comprehensive cookbook should be in every cook’s collection.

Filled with a bountiful range of appealing dishes, the book features simple recipes that will make preparing these delectable meals as enjoyable as consuming them.  From classics like baba ghanoush, hummus, falafel, and baklava to the more exotic dishes such as dolmades stuffed with rice, squid in ink, sour chicken with sumac and walnuts, and fig marmalade with grape molasses, these tasty recipes bring the Arab culture right to your kitchen. Experience Arab cuisine with traditional dishes from Lebanon, Morocco, Iraq, and Egypt, and delight in the rich textures, appetizing aromas, and delicious flavors.

These fifty-five recipes, ranging from appetizers, dips, and main courses to desserts and pastries, are perfect for those wishing to broaden their culinary expertise, as well as beginners who want to whip up some easy and delicious Arab dishes.

Ramzi Choueiry studied business in Lyon, France, and culinary arts at Bournemouth College in the United Kingdom. After returning to Lebanon in 1993, he became the country’s first television chef, and he is currently the host of a live cooking show. He is also the author of The Culinary Heritage of Lebanon and Chef Ramzi. Choueiry lives in Beirut, Lebanon.

Bo Masser is a Swedish chef, cookbook author, and vice president of the Gourmand World Cookbook Awards. He lives in Sweden.

Bruno Ehrs is a photographer. He lives in Sweden.
Loading...
or
Not Currently Available for Direct Purchase