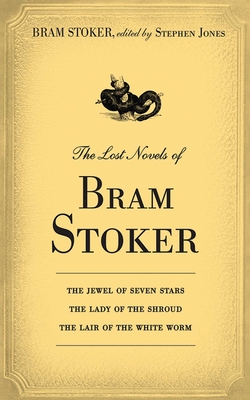 The Lost Novels of Bram Stoker

A new compilation of cult vampire novels from Dracula author Bram Stoker for the 100th anniversary of his death.

This delightful new compilation of Bram Stoker's cult classics will be sure to satisfy any lover of vampire fiction, from Dracula to Twilight. All three novels were published after Dracula debuted in 1897. They flirt with vampirism, horror, and human folly in the best Gothic tradition - all attempts to duplicate Stoker's only success.

Included in this anthology are:

The Jewel of Seven Stars (1903), a tale about an archaeologist's dangerous plot to revive Queen Tera, an ancient Egyptian mummy. The book caused a controversy upon publication for what readers called its "gruesome ending". His publisher refused to republish the book until Stoker revised it. The Lost Novels of Bram Stoker includes both the original ending and the lighter, more commercial version.

The Lady of the Shroud (1909), a classic example of early science fiction, although it remains one of his more obscure works. Beginning with a stunning sequence that finds a mysterious lady in a small coffin floating off the coast of a fictional country in the Balkan Peninsula, and beguiling the reader with a beautiful lady in a white shroud who may or may not be undead, this is a not-to-be-missed vampire tale!

The Lair of the White Worm (1911), a camp-horror tale from an acknowledged master of the genre. The great white worm slithers below, seeking its next victim.