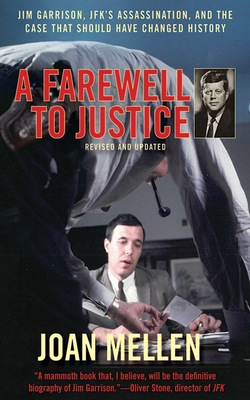 A Farewell to Justice

Jim Garrison, JFK's Assassination, and the Case That Should Have Changed History

Working with thousands of previously unreleased documents and drawing on more than one thousand interviews, with many witnesses speaking out for the first time, Joan Mellen revisits the investigation of New Orleans district attorney Jim Garrison, the only public official to have indicted, in 1969, a suspect in President John F. Kennedy’s murder.

Garrison began by exposing the contradictions in the Warren Report, which concluded that Lee Harvey Oswald was an unstable pro-Castro Marxist who acted alone in killing Kennedy. A Farewell to Justice reveals that Oswald, no Marxist, was in fact working with both the FBI and the CIA, as well as with US Customs, and that the attempts to sabotage Garrison’s investigation reached the highest levels of the US government. Garrison’s suspects included CIA-sponsored soldiers of fortune enlisted in assassination attempts against Fidel Castro, an anti-Castro Cuban asset, and a young runner for the conspirators, interviewed here for the first time by the author.

Building upon Garrison’s effort, Mellen uncovers decisive new evidence and clearly establishes the intelligence agencies’ roles in both a president’s assassination and its cover-up. In this revised edition, to be published in time for the fiftieth anniversary of the president’s assassination, the author reveals new sources and recently uncovered documents confirming in greater detail just how involved the CIA was in the events of November 22, 1963. More than one hundred new pages add critical evidence and information into one of the most significant events in human history.

Joan Mellen is the bestselling author of twenty books, including A Farewell to Justice, her biographical study of Jim Garrison’s New Orleans investigation of the Kennedy assassination. She has written for a variety of publications, including the New York Times, Los Angeles Times, Philadelphia Inquirer, and Baltimore Sun. Mellen is a professor of English and creative writing at Temple University in Philadelphia.
Loading...
or
Not Currently Available for Direct Purchase