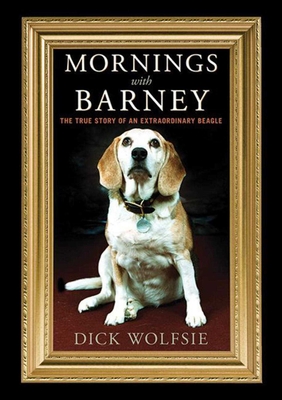 The True Story of an Extraordinary Beagle

"I enrolled Barney in obedience school. If I had known how being ‘bad’ would be part of his charm and would add to his success on camera, I might have given this more thought." — Dick Wolfsie

Television reporter Dick Wolfsie was walking out his front door on the way to the studio one wintry morning when he found a shivering beagle pup on his front steps. Dick placed the stray inside the house and was off to work. When he returned four hours later, his wife and young son were cleaning up what remained of the shredded couch, the living room curtains, and his wife’s favorite high heels.
The family would soon demand that Dick either take the dog to work with him each day or find the troublemaker a minimum security facility. So, off to the station they went. Ultimately this naughty pup nosed his way in front of the camera with Dick. Soon the dynamic duo would make TV history.

For ten years—more than 2,500 morning news shows—fans watched the renegade pooch chew, howl, and dig his way through every one of Dick’s reports. But he also burrowed his way into everybody’s heart, becoming a beloved media star. Mornings with Barney is a hoot from start to finish.

Dick Wolfsie, an Emmy-Award-winner has been a television talk show host and reporter for almost thirty years. The former high school psychology teacher is also a syndicated newspaper columnist and author of eleven books. He lives in Indianapolis with his wife, Mary Ellen, and his son, Brett, and his second beagle, Toby. Oh, and Angel, the cat.
or support indie stores by buying on
(This book is on backorder)
Copyright © 2020 American Booksellers Association