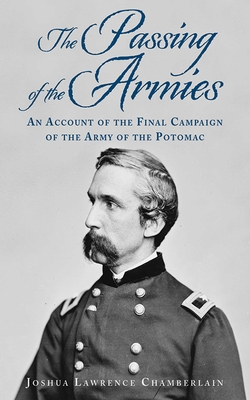 The Passing of the Armies

An Account of the Final Campaign of the Army of the Potomac, Based upon Personal Reminiscences of the Fifth Army Corps

“He was as great a writer as he was a fighter.” —Albert Castel, Civil War Times Illustrated.

Written by one of the Civil War’s most celebrated officers, a hero of Gettysburg, this classic book offers a remarkable first-hand account of the final campaign of the Army of the Potomac. This is one of the finest accounts of a campaign penned by a Federal soldier.

Joshua Lawrence Chamberlain was a Maine college professor who entered the Union Army in 1862. He fought with the Twentieth Maine at Antietam, Fredericksburg, Chancellorsville, Gettysburg, Spotsylvania, and Cold Harbor and was awarded the Congressional Medal of Honor for his role in the Battle of Gettysburg at Little Round Top.

In the campaigns described here, Chamberlain commanded a brigade in the Fifth Corps in the Army of the Potomac during the final days of the war. His eyewitness account takes us past Lee’s surrender to show the beginnings of Reconstruction.