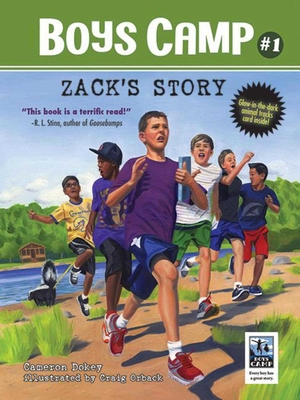 So, Zack Wilson thought, almost laughing at himself. I've been at Camp Wolf Trail, what? Ten minutes? And already I'm having an adventure. At last! Being at Camp Wolf Trail is a dream come true for city boy Zack. Finally, he'll have the summer full of wilderness backpacking, rock climbing, canoeing, whitewater rafting, challenge, friendship, and fun of which he's always dreamed. But nature has surprises in store for Zack: animals, weather, and even the earth itself don't behave he way he expects them to, and especially not the way his favorite book, The Outdoor Adventure Guide, has described them. After Zack makes a mistake that nearly costs him the friendship and trust of his cabinmates, he loses confidence in his book—and in himself too. When a scary catastrophe happens, and Zack is faced with life-threatening danger, will he have the courage and problem-solving smarts to lead his friends to safety?

Cameron Dokey began her professional writing career as an actor in regional repertory theater, spending four of the happiest years of her life at the Oregon Shakespeare Festival in Ashland. Following her stint as an actor, Cameron segued first to nonfiction writing, as an exhibit text writer, and finally, to fiction. Somehow, she never got to summer camp, so she was delighted to be asked to go on an adventure at Camp Wolf Trail. She lives in Seattle, Washington.

Craig Orback has illustrated numerous award-winning children’s books including The Can Man and Nature’s Paintbox. He received his BFA in illustration from Cornish College of the Arts in 1998. Craig attended summer camp just like the boys in Boys Camp and now teaches children’s book illustration at local colleges. He lives in Seattle, Washington.
Loading...
or
Not Currently Available for Direct Purchase