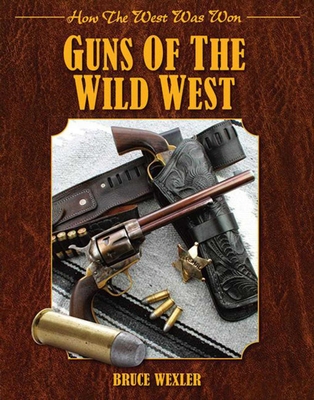 Guns of the Wild West

How the West Was Won

Guns of the Wild West brings the nation’s westward expansion and growing need for weaponry to life in an illustrated guide to the history of American firearms. Through vibrant imagery, Bruce Wexler showcases weapons such as the classic Colt Single Action Army and the iconic pepper-box revolver, which made their way into both military and civilian hands during the settling of the frontier. Exclusive archive photographs link the guns to famous heroes and villains, places, and historical events—from Wyatt Earp’s Smith & Wesson Model 3 to John Wilkes Booth’s Philadelphia Derringer. Wexler profiles the notable gunsmiths that hold a place in Western history, including the great American manufacturers such as Colt, Smith & Wesson, and Winchester, as well as lesser-known ones such as Merwin Hulbert and Henry Deringer.

Wexler’s thorough research shows how the widespread use of new firearms—fueled in part by advances made during the Civil War—played a definitive role in America’s growth and identity. The reader is presented with detailed depictions of the various weapons used by cowboys, lawmen, soldiers, gunslingers, and Native Americans. Guns of the Wild West is a treasure for gun collectors, history buffs, and fans of Western novels and movies.

Bruce Wexler is also the author of The Wild, Wild West of Louis L'Amour, The Authentic South of Gone with Wind, and The Mysterious World of Sherlock Holmes. Through meticulous study, he has gained an intimate cultural knowledge of the American frontier and the works of Louis L-Amour.  He lives in London.
or
Not Currently Available for Direct Purchase