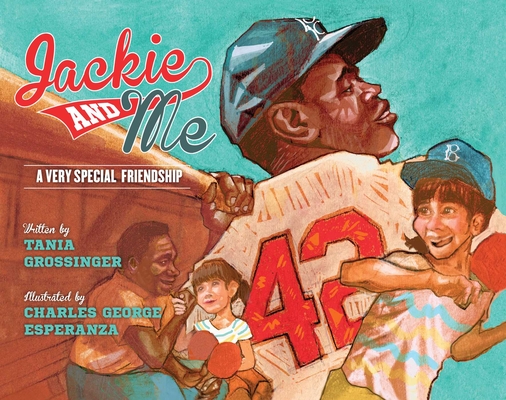 Thirteen-year-old Tania Grossinger lives in the famous Grossinger hotel in New York's Catskill Mountains, but she doesn't feel like a real Grossinger; her cousins own the hotel, and Tania often feels like she doesn't belong. Lots of celebrities come to Grossinger's, but Tania just wants to meet one man: Jackie Robinson, the first African American to play Major League baseball. When Jackie stays at Grossinger's on vacation, he hears that Tania is a terrific ping-pong player. Jackie invites the young girl to meet him for a game at four o-clock—but she doesn't believe he's serious and stays in her room to read. Soon the telephone rings; it's Jackie, wondering where Tania is! When she dashes downstairs to the game room, the famous Dodgers star is waiting for Tania—and this is the beginning of an unlikely but very special friendship

Playing ping-pong, drinking soda, going on walks, and ice skating together, Tania learns some important—and simple—life lessons from Jackie. Tania Grossinger's charming true story will appeal to parents and children, girls and boys, avid baseball fans and people who have never seen a game. Jackie and Me offers a unique glimpse into icon Jackie Robinson's life off the field, told from a very special perspective: that of a friend.

Tania Grossinger has worked as a publicist, travel writer, and author (The Book of Gadgets, the novel Weekend) for many years. She lives in New York, New York.

Charles George Esperanza, illustrator of Jackie and Me, was born the second of six kids. The South Bronx is where he first opened his eyelids. A land shrouded in bright colored decay, the birthplace of graffiti and the hip-hop DJ! He paints fantasy worlds of elephants, and castles too! Accompanying this wonder is some promising truth. Charles has a voice that is seldom heard. A fusion of jazz, distorted guitars, and chirping birds. He resides in the Bronx, New York.
Loading...
or
Not Currently Available for Direct Purchase