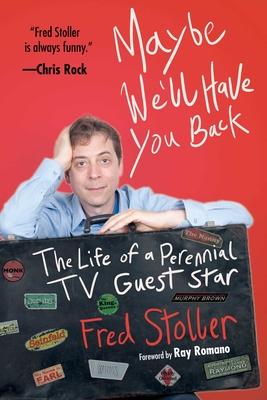 Maybe We'll Have You Back

The Life of a Perennial TV Guest Star

Fred Stoller has played the annoying schnook in just about every sitcom you’ve seen on TV—Friends, Everybody Loves Raymond, Scrubs, Hannah Montana, My Name Is Earl—and was even a staff writer for Seinfeld, but he’s never found a solid gig. When it comes to Hollywood, it’s a case of always the bridesmaid and never the bride, except in his case he’s always the snarky waiter, the mopey cousin, or Man #2.

This hilarious and bittersweet rags-to-rags story of the hardest-working guy in showbiz follows Fred, who started his career as a stand-up comic, from set to set as he tries to find a permanent home for his oddball character. With candor, Fred shares stories of his great adventures pounding the Hollywood pavement, including a humiliating encounter with Billy Crystal, a disastrous one-night stand with Kathy Griffin, and plenty of awkward run-ins at craft service tables. And he always shares his ups and downs with his skeptical yet loving mother waiting by the phone in Brooklyn.

Everyone can relate to searching for a dream job or their next big break, and will root for Fred as he weaves his way through the cutthroat world of Tinseltown.

Fred Stoller was raised in Brooklyn and started out as a stand-up comedian, known for his dating woes and his thrill-seeker persona (I drank milk that expired yesterday!). He appeared on many late night shows and has guest-starred in more than seventy TV shows and films such as Dumb and Dumber. Fred & Vinnie, the indie feature he wrote and starred in, won the Audience award at the Austin Film Festival. He chronicled his experience writing for Seinfeld in the bestselling Amazon Kindle Single My Seinfeld Year. He lives in Los Angeles, California.
Loading...
or
Not Currently Available for Direct Purchase