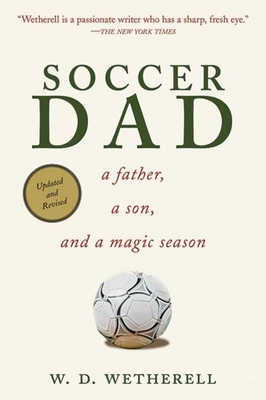 A Father, a Son, and a Magic Season

Soccer Dad is simultaneously the candid reflections of a devoted father and the enthusiastic observations of a diehard soccer fan. When Matt enters his senior year of high school, it is not without myriad parenting concerns on the part of his father, author W. D. Wetherell. What is his role in shaping his son's future? What will life be like when Matt is away at college? And what of Matt's soccer season?—Is Matt's success in soccer just setting him up for disappointment later in life? With the pensive eye of an artist, Wetherell follows his son's team from field to field and win to win and ruminates on topics ranging from soccer's esoteric appeal in America to the conflicting emotions of a parent sending his youngest child out into the world. Reflecting on his own experiences both as a participant and a spectator, Wetherell offers a paean to the sport of soccer and the joys of parenthood.

Updated and revised with a new chapter that brings Soccer Dad fully up to date, this is an exciting new edition that readers will enjoy for years to come.