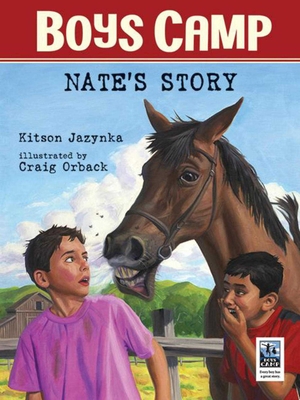 Nate has returned to Camp Wolf Trail, his own personal heaven for the past two summers, with a secret: He doesn't want his cabinmates to know that he's a Bird Nerd. At least, that's what the kids at his school called him when they teased him about his newly found interest in birds. Nate confides in Vik, but can he trust his friend, the cabin jokester? Tension grows when before an overnight horse-riding trip Nate discovers that he has another secret. He is terrified of horses, even Herschel, the boney old horse assigned to Nate from the group of rescue horses that the campers ride.

Nate shows honesty and bravery when he faces his fears—both of being laughed at for his hobby and his apprehension of riding horses. His friends and his sense of humor save him when his secret is revealed without his consent. But what will Nate do when a wildfire threatens the safety of his friends, the horses, and himself while on a horseback trek deep in the forest? What will be the fate of homely Herschel, the horse no one wants to adopt? With profound admiration of nature, honesty, and above all, boy-friendly, lively humor, acclaimed author Kitson Jazynka and veteran illustrator Craig Orback catch and capture readers' eager interest in this exciting book for boys.

Kitson Jazynka is an award-winning freelance writer and children’s author. Her work appears regularly in National Geographic Kids, American Girl, and Young Rider magazines, as well as the Washington Post's KidsPost section. A lifelong horse lover and equestrian, Jazynka currently lives with her family—including her two young sons—in Washington, DC, and keeps a horse at a stable nearby.

Craig Orback is a freelance children’s book illustrator who graduated with a degree in illustration from Cornish College of the Arts. Since 2001, he has illustrated eighteen children’s books, including Boys Camp: Zack’s Story, while simultaneously working on projects for children’s magazines, school textbooks, and other avenues. He resides in Seattle, Washington.
Loading...
or
Not Currently Available for Direct Purchase