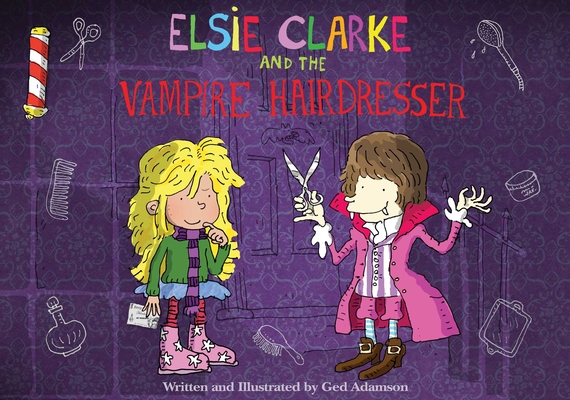 Elsie Clarke and the Vampire Hairdresser

Elsie hates getting her haircut. There's absolutely nothing more terrifying for her. "They squirt you and they pull and they snip!" she cries in her most horribly loud voice. "I'm never going again. EVER!"

But after some coercion from her parents, Elsie reluctantly tries a new hairdresser named Boris Lazzario. Almost immediately, Boris is eager to cut her hair, but then learns of her fear. Reassuringly, Boris explains that his father, Count Lazzario, also dreads haircuts and is unhappy by Boris's profession Boris. When confronted with the mean Count Lazzario, Elsie learns that she must be brave, in the end, both she and the count learn that haircuts are not so scary after al.
With playful text and distinct illustrations, this story will surely improve any child's perception on those dreaded haircuts!

Ged Adamson is a published cartoonist and illustrator. His cartoons can be found in magazines such as Punch and Prospect, as well as in books, on television, and in films. His first book, Elsie Clarke and the Vampire Hairdresser, was published by Sky Pony Press in 2013. He lives in Greenwich, England.
Loading...
or
Not Currently Available for Direct Purchase