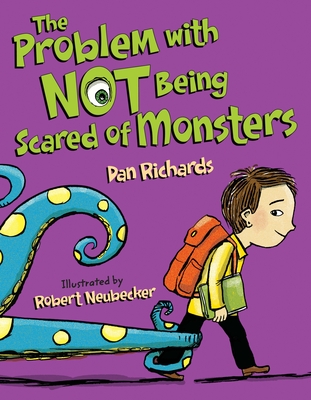 The Problem with Not Being Scared of Monsters

Who knew there was a problem with not being scared of monsters? The hero of this story knows it—all too well. Because he's not scared, the monsters think he's one of them. And now, they're way too friendly. They want to share everything! Which is, of course, a disaster. Good thing there's a terrified little brother to come to the rescue. With an understated text and hilarious illustrations, this picture book will have kids laughing away their fears.

Praise For The Problem with Not Being Scared of Monsters…

"Plenty of Halloween stories deal with fear, but debut author Richards suggests that bravery has its own pitfalls. . . Neubecker's pen-and-ink cartoons draw a good amount of fun out of the relationship between the put-upon narrator and the wide-eyed, well-meaning beasties." &#8212;Publishers Weekly

"Intrepid monster lovers will delight in reading again and again this lift of irksome consequences of being friendly with these creatures. The watercolor and pen cartoons do not miss a mark . . . The nighttime flash-lit illustrations are superb, as are the dynamic layouts. . . Recommend this one to mischievous types of all shapes and sizes . . ." &#8212;School Library Journal

"The problem with not being scared of monsters, our young narrator finds, is that monsters become entirely too comfortable with you, and those monsters can be some pesky pals. . . The simple and spare text renders the challenges of monstrous pals understandable. . . Tentacled and fanged monsters made silly with glibness reminiscent of Dr. Seuss' There's a Wocket in My Pocket will leave kids smiling after a monster-themed storytime." &#8212;The Bulletin of the Center for Children's Book

Dan Richards has been interested in monsters since he was old enough to check under his bed. He's been checking ever since and has found many of his closest friends that way. The Problem with Not Being Scared of Monsters is his first picture book. He lives with his family in Bothell, Washington. danrichardsbooks.com.

Robert Neubecker is a regular contributor to many national media publications, including the New York Times, Slate, and the Wall Street Journal. He is the award winning author-illustrator of Wow! City!; Wow! America!; and Wow! School! and has also illustrated many picture books, including Time Out for Monsters by Jeane Reidy and I Got Two Dogs by John Lithgow. He lives in Park City, Utah with his family, dogs, cats, and lizards. neubecker.com.
Loading...
or support indie stores by buying on