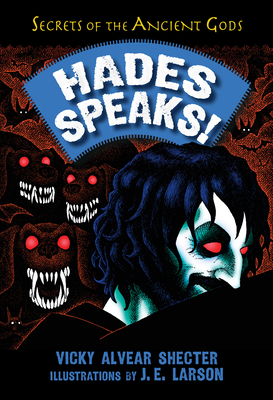 Hades, god of the dead, welcomes readers on a dangerous tour of his underworld kingdom, filled with monsters, furies, giants, and vampire demons. Along the way, he reveals ancient death rites and sinister curses, tells hair-raising stories, and cracks jokes to die for. With his witty voice and ghoulish sense of humor, Hades is the perfect guide through this fresh and imaginative work of nonfiction that reads like a novel. Includes a glossary, bibliography, and index.

Vicky Alvear Shecter is the author of Anubis Speaks! A Guide to the Afterlife by the Egyptian God of the Dead, Cleopatra Rules! The Amazing Life of the Original Teen Queen, Cleopatra's Moon, and Alexander the Great Rocks the World. She lives in Atlanta, Georgia. vickyalvearshecter.com

Praise For Hades Speaks!: A Guide to the Underworld by the Greek God of the Dead (Secrets of the Ancient Gods)…

"Hades guides modern readers through the Anciet Greek underworld of the dead. . . a fun introduction that will spark further interest in mythology." --School Library Journal
or support indie stores by buying on
Copyright © 2020 American Booksellers Association