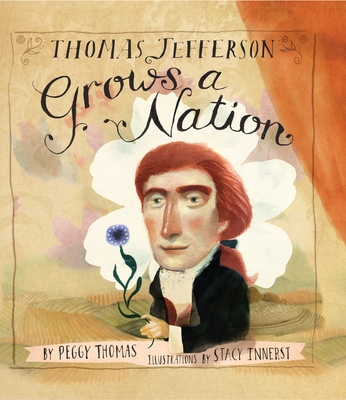 Thomas Jefferson was more than a president and patriot. He was also a planter and gardener who loved to watch things grow—everything from plants and crops to even his brand-new nation.

As minister to France, Jefferson promoted all things American, sharing corn and pecans with his Parisian neighbors. As secretary of state, he encouraged his fellow farmers to grow olives, rice and maple trees. As president, he doubled the size of the nation with the Louisiana Purchase. Even in his retirement, Jefferson continued to nurture the nation, laying the groundwork for the University of Virginia. In this meticulously researched picture book for older readers, author Peggy Thomas uncovers Jefferson's passion for agriculture and his country. And Stacy Innerst's incredibly original illustrations offer the right balance of reverence and whimsy. This is Thomas Jefferson as he's never been seen before! Back matter includes an author's note on Jefferson's legacy today; timeline, bibliography; place to visit (Monticello); and source notes.

"Using Thomas Jefferson's own admissions of passion for both his new country and agriculture, details are given about a few of his activities, inventions, and accomplishments, beginning after the Revolutionary War.... (t)he text... contains sophisticated ideas and vocabulary, and numerous quotations appear in the entertaining artwork and the text itself.... it is no small feat to choose but a few facts about such a well-documented life; the choices made and the method of telling are both exemplary." — Kirkus Reviews

Peggy Thomas has been researching and writing award-winning children's nonfiction for more than 20 years. She lives in Middleport, New York. peggythomaswrites.com.

Stacy Innerst is an artist and illustrator of seven books for children. His picture books have been awarded a BCCB Blue Ribbon Picture Book Award as well as a Parents' Choice Gold Medal and have been selected for recognition by the NY Society of Illustrators, Publishers Weekly Best Books, SLJ Best Books, and the Smithsonian, among others. He lives in Pittsburgh, Pennsylvania. stacyinnerst.com.
Loading...
or support indie stores by buying on