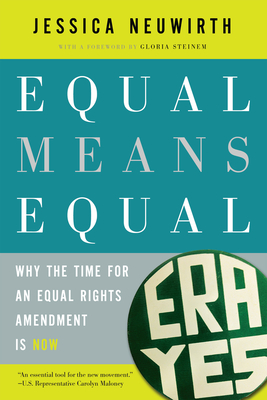 Why the Time for an Equal Rights Amendment Is Now

When the Equal Rights Amendment was first passed by Congress in 1972, Richard Nixon was president and All in the Family's Archie Bunker was telling his feisty wife Edith to stifle it. Over the course of the next ten years, an initial wave of enthusiasm led to ratification of the ERA by thirty-five states, just three short of the thirty-eight states needed by the 1982 deadline. Many of the arguments against the ERA that historically stood in the way of ratification have gone the way of bouffant hairdos and Bobby Riggs, and a new Coalition for the ERA was recently set up to bring the experience and wisdom of old-guard activists together with the energy and social media skills of a new-guard generation of women. In a series of short, accessible chapters looking at several key areas of sex discrimination recognized by the Supreme Court, Equal Means Equal tells the story of the legal cases that inform the need for an ERA, along with contemporary cases in which women's rights are compromised without the protection of an ERA. Covering topics ranging from pay equity and pregnancy discrimination to violence against women, Equal Means Equal makes abundantly clear that an ERA will improve the lives of real women living in America.

The founder of the international women's rights organization Equality Now, Jessica Neuwirth is the former director of the New York branch of the Office of the United Nations High Commissioner for Human Rights. She lives in New York City. Gloria Steinem is an American feminist, journalist, and social and political activist who became nationally recognized as a leader of, and media spokeswoman for, the women's liberation movement in the 1960s and 1970s. She lives in New York City.
Loading...
or support indie stores by buying on