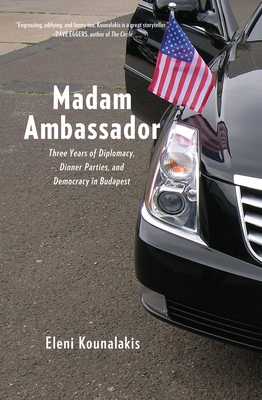 Three Years of Diplomacy, Dinner Parties, and Democracy in Budapest

A helicopter ride to visit troops in the Afghanistan war zone, a tense meeting with the newly elected Prime Minister, and...a wild boar hunt Eleni Kounalakis was forty-three and a land developer in Sacramento, California, when she was tapped by President Barack Obama to serve as the U.S. ambassador to Hungary under Secretary of State Hillary Clinton. During her tenure, from 2010 to 2013, Hungary was a key ally in the U.S. military surge, held elections in which a center-right candidate gained a two-thirds supermajority and rewrote the country's constitution, and grappled with the rise of Hungarian nationalism and anti-semitism. The first Greek-American woman ever to serve as a U.S. ambassador, Kounalakis recounts her training at the State Department's "charm school" and her three years of diplomatic life in Budapest--from protocols about seating, salutations, and embassy security to what to do when the deposed King of Greece hands you a small chocolate crown (eat it, of course ). A cross between a foreign policy memoir and an inspiring personal family story--her immigrant Greek father went from agricultural day laborer to land developer and major Democratic party activist--Madam Ambassador draws back the curtain on what it is like to represent the U.S. government abroad as well as how American embassies around the world function.