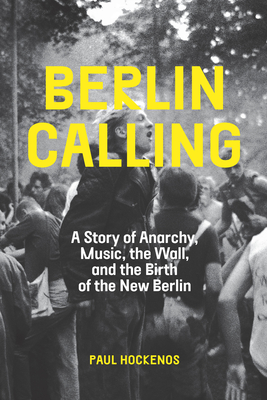 A Story of Anarchy, Music, the Wall, and the Birth of the New Berlin

An exhilarating journey through the subcultures, occupied squats, and late-night scenes in the anarchic first few years of Berlin after the fall of the wall Berlin Calling is a gripping account of the 1989 peaceful revolution in East Germany that upended communism and the tumultuous years of artistic ferment, political improvisation, and pirate utopias that followed. It's the story of a newly undivided Berlin when protest and punk rock, bohemia and direct democracy, techno and free theater were the order of the day. In a story stocked with fascinating characters from Berlin's highly politicized undergrounds--including playwright Heiner M ller, cult figure Blixa Bargeld of the industrial band Einst rzende Neubauten, the internationally known French Wall artist Thierry Noir, the American multimedia artist Danielle de Picciotto (founder of Love Parade), and David Bowie during his Ziggy Stardust incarnation--Hockenos argues that the DIY energy and raw urban vibe of the early 1990s shaped the new Berlin and still pulses through the city today. Just as Mike Davis captured Los Angeles in his City of Quartz, Berlin Calling is a unique account of how Berlin became hip, and of why it continues to attract creative types from the world over.

Paul Hockenos is an American journalist and author who writes for The Nation, the Chronicle of Higher Education, Foreign Policy, the New York Times, and many other media outlets. He has held prize fellowships with the American Academy in Berlin, the European Journalism College, the German Marshall Fund of the United States, and the Carnegie Endowment for International Peace. He is the author of three books, including Joschka Fischer and the Making of the Berlin Republic, and lives in Berlin.
Loading...
or support indie stores by buying on