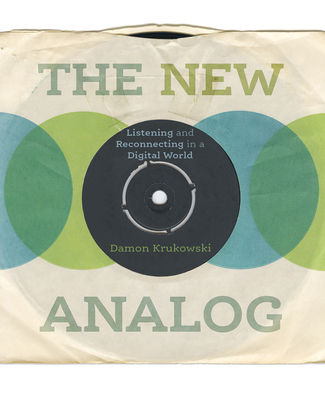 Listening and Reconnecting in a Digital World

An NPR Best Book of 2017 "This is not a book about why vinyl sounds better; it's way more interesting than that . . . it] is full of things I didn't know, like why people yell into cellphones . . . Ultimately, it's about how we consume sound as a society - which is, increasingly, on an individual basis."
--NPR "If you're a devoted music fan who's dubious about both rosy nostalgia and futuristic utopianism, Damon Krukowski's The New Analog is for you."
--The New York Times Book Review "A pointedly passionate look at what's been lost in the digital era."
--Los Angeles Times What John Berger did to ways of seeing, well-known indie musician Damon Krukowski does to ways of listening in this lively guide to the transition from analog to digital culture

Having made his name in the late 1980s as a member of the indie band Galaxie 500, Damon Krukowski has watched cultural life lurch from analog to digital. And as an artist who has weathered the transition, he has challenging, urgent questions for both creators and consumers about what we have thrown away in the process: Are our devices leaving us lost in our own headspace even as they pinpoint our location? Does the long reach of digital communication come at the sacrifice of our ability to gauge social distance? Do streaming media discourage us from listening closely? Are we hearing each other fully in this new environment?

Rather than simply rejecting the digital disruption of cultural life, Krukowski uses the sound engineer's distinction of signal and noise to reexamine what we have lost as a technological culture, looking carefully at what was valuable in the analog realm so we can hold on to it. Taking a set of experiences from the production and consumption of music that have changed since the analog era--the disorientation of headphones, flattening of the voice, silence of media, loudness of mastering, and manipulation of time--as a basis for a broader exploration of contemporary culture, Krukowski gives us a brilliant meditation and guide to keeping our heads amid the digital flux. Think of it as plugging in without tuning out.

Damon Krukowski was in the indie rock band Galaxie 500 and is currently one half of the folk-rock duo Damon & Naomi. He has written for Pitchfork, Artforum, Bookforum, Frieze, The Wire, and on his blog International Sad Hits. He has published two books of prose poetry, serves as co-publisher of the literary press Exact Change, and is the author of The New Analog (The New Press). He has taught writing and music at Harvard University and lives in Cambridge, Massachusetts.
Loading...
or
Not Currently Available for Direct Purchase