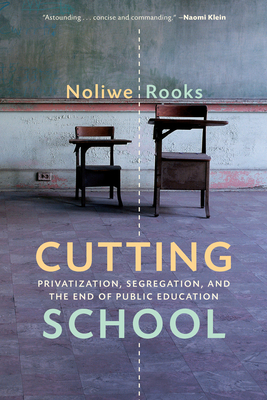 The Segrenomics of American Education

A timely indictment of the corporate takeover of education and the privatization--and profitability--of separate and unequal schools, published at a critical time in the dismantling of public education in America

An astounding look at America's segregated school system, weaving together historical dynamics of race, class, and growing inequality into one concise and commanding story. Cutting School puts our schools at the center of the fight for a new commons.
--Naomi Klein, author of No Is Not Enough and This Changes Everything

Public schools are among America's greatest achievements in modern history, yet from the earliest days of tax-supported education--today a sector with an estimated budget of over half a billion dollars--there have been intractable tensions tied to race and poverty. Now, in an era characterized by levels of school segregation the country has not seen since the mid-twentieth century, cultural critic and American studies professor Noliwe Rooks provides a trenchant analysis of our separate and unequal schools and argues that profiting from our nation's failure to provide a high-quality education to all children has become a very big business.

Cutting School deftly traces the financing of segregated education in America, from reconstruction through Brown v. Board of Education up to the current controversies around school choice, teacher quality, the school-to-prison pipeline, and more, to elucidate the course we are on today: the wholesale privatization of our schools. Rooks's incisive critique breaks down the fraught landscape of segrenomics, showing how experimental solutions to the so-called achievement gaps--including charters, vouchers, and cyber schools--rely on, profit from, and ultimately exacerbate disturbingly high levels of racial and economic segregation under the guise of providing equal opportunity.

Rooks chronicles the making and unmaking of public education and the disastrous impact of funneling public dollars to private for-profit and nonprofit operations. As the infrastructure crumbles, a number of major U.S. cities are poised to permanently dismantle their public school systems--the very foundation of our multicultural democracy. Yet Rooks finds hope and promise in the inspired individuals and powerful movements fighting to save urban schools.

A comprehensive, compelling account of what's truly at stake in the relentless push to deregulate and privatize, Cutting School is a cri de coeur for all of us to resist educational apartheid in America.

Noliwe Rooks is the director of American Studies at Cornell University and was for ten years the associate director of African American studies at Princeton University. She is the author of White Money/Black Power, Hair Raising, and Cutting School (The New Press). She lives in Ithaca, New York.
Loading...
or support indie stores by buying on