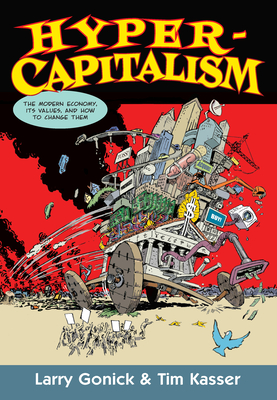 The Modern Economy, Its Values, and How to Change Them

PAPERBACK ORIGINAL From the bestselling cartoonist of The Cartoon History of the Universe comes an explosive graphic takedown of capitalism Bestselling "overeducated cartoonist" Larry Gonick has delighted readers for years with sharp, digestible, and funny accounts of everything from the history of the universe to the intricacies of calculus. Now Gonick teams up with psychologist and scholar Tim Kasser to create an accessible and pointed cartoon guide to how global, privatizing, market-worshiping hypercapitalism threatens human well-being, social justice, and the planet. But Gonick and Kasser don't stop at an analysis of how the economic system got out of whack--they also point the way to a healthier future. A primer for the post-Occupy generation, Hypercapitalism draws from contemporary research on values, well-being, and consumerism to describe concepts (corporate power, free trade, privatization, deregulation) that are critical for understanding the world we live in, and movements (voluntary simplicity, sharing, alternatives to GDP, protests) that have developed in response to the system. Gonick and Kasser's pointed and profound cartoon narratives provide a deep exploration of the global economy and the movements seeking to change it, all rendered in clear, graphic--and sometimes hilarious--terms.

Larry Gonick, a cartoonist specializing in nonfiction books, is best known for his Cartoon Histories and his Cartoon Guides to various sciences. He lives in San Francisco. Tim Kasser, a professor of psychology at Knox College in Galesburg, Illinois, has spent two decades researching materialism, consumerism, capitalism, well-being, and the environment. He has written three books and consults with a variety of non-profit organizations.
Loading...
or support indie stores by buying on