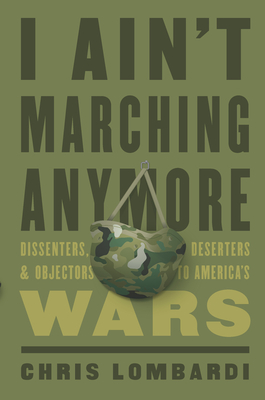 Before the U.S. Constitution had even been signed, soldiers and new veterans protested. Dissent, the hallowed expression of disagreement and refusal to comply with the government's wishes, has a long history in the United States. Soldier dissenters, outraged by the country's wars or egregious violations in conduct, speak out and change U.S. politics, social welfare systems, and histories.

I Ain't Marching Anymore carefully traces soldier dissent from the early days of the republic through the wars that followed, including the genocidal "Indian Wars," the Civil War, long battles against slavery and racism that continue today, both World Wars, Korea, Vietnam, the Cold War, and contemporary military imbroglios.

Acclaimed journalist Chris Lombardi presents a soaring history valorizing the brave men and women who spoke up, spoke out, and talked back to national power. Inviting readers to understand the texture of dissent and its evolving and ongoing meaning, I Ain't Marching Anymore profiles conscientious objectors including Frederick Douglass's son Lewis, Evan Thomas, Howard Zinn, William Kunstler, and Chelsea Manning, adding human dimensions to debates about war and peace.

Meticulously researched, rich in characters, and vivid in storytelling, I Ain't Marching Anymore celebrates the sweeping spirit of dissent in the American tradition and invigorates its meaning for new risk-taking dissenters.

Journalist Chris Lombardi has been writing about war and peace for more than twenty years. Her work has appeared in The Nation, Guernica' the Philadelphia Inquirer' ABA Journal' and at WHYY.org. She lives in Philadelphia.
Loading...
or support indie stores by buying on