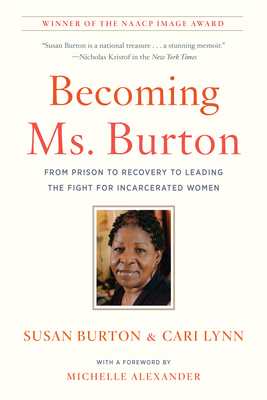 Winner of the 2018 National Council on Crime & Delinquency's Media for a Just Society Awards Winner of the 2017 Goddard Riverside Stephan Russo Book Prize for Social Justice "Valuable . . . like Michelle] Alexander's The New Jim Crow."
--Los Angeles Review of Books "Susan Burton is a national treasure . . . her life story is testimony to the human capacity for resilience and recovery . . . Becoming Ms. Burton is] a stunning memoir."
--Nicholas Kristof, in The New York Times Winner of the prestigious NAACP Image Award, a uniquely American story of trauma, incarceration, and the breathtaking resilience of the human spirit (Michelle Alexander)

Widely hailed as a stunning memoir, Becoming Ms. Burton is the remarkable life story of the renowned activist Susan Burton.

In this stirring and moving tour-de-force (John Legend), Susan Burton movingly recounts her own journey through the criminal justice system and her transformation into a life of advocacy. After a childhood of immense pain, poverty, and abuse in Los Angeles, the tragic loss of her son led her into addiction, which in turn led to arrests and incarceration. During the War on Drugs, Burton was arrested and would cycle in and out of prison for more than fifteen years. When, by chance, she finally received treatment, her political awakening began and she became a powerful advocate for a more humane justice system guided by compassion and dignity (Booklist, starred review). Her award-winning organization, A New Way of Life, has transformed the lives of more than one thousand formerly incarcerated women and is an international model for a less punitive and more effective approach to rehabilitation and reentry.

Winner of an NAACP Image Award and named a Best Book of 2017 by the Chicago Public Library, here is an unforgettable book about the breathtaking resilience of the human spirit (Michelle Alexander).

Susan Burton is the founder and executive director of A New Way of Life, a nonprofit that provides sober housing and other support to formerly incarcerated women. Nationally known as an advocate for restoring basic civil and human rights to those who have served time, Burton was a winner of AARP's prestigious Purpose Prize and has been a Starbucks Upstander, a CNN Top 10 Hero, and a Soros Justice Fellow. She lives in Los Angeles. Cari Lynn is a journalist and the author of five books of nonfiction, including Leg the Spread and The Whistleblower (with Kathryn Bolkovac). Lynn has written for O, The Oprah Magazine; Health; the Chicago Tribune; and Deadline Hollywood. She lives in Los Angeles. Michelle Alexander is the author of the bestselling The New Jim Crow: Mass Incarceration in the Age of Colorblindness (The New Press). She lives in Ohio.
Loading...
or support indie stores by buying on