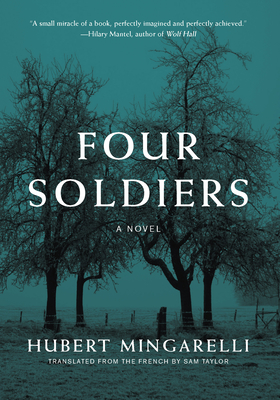 "Its simplicity lends it grandeur. One thinks of Maxim Gorky, or even the early sketches of Tolstoy."
--The Wall Street Journal
A small miracle of a book, perfectly imagined and perfectly achieved.
--Hilary Mantel, author of Booker Prize-winning novels Wolf Hall and Bring up the Bodies A novel of war, revolution, youth, and friendship by the remarkable (Ian McEwan) French author of A Meal in Winter

Hubert Mingarelli's simple, powerful, and moving stories of men in combat have established him as one of the most exciting new voices in international fiction.

In Four Soldiers he tells the story of four young soldiers in 1919, members of the Red Army during the Russian civil war. It is set in the harsh dead of winter, just as the soldiers set up camp in a forest in Galicia near the Romanian front line. Due to a lull in fighting, their days are taken up with the mundane tasks of trying to scratch together what food and comforts they can find, all the time while talking, smoking, and waiting. Waiting specifically for spring to come. Waiting for their battalion to move on. Waiting for the inevitable resumption of violence.

Recalling great works like Isaac Babel's Red Cavalry, Ernest Hemingway's A Farewell to Arms, and Stephen Crane's The Red Badge of Courage, Four Soldiers is a timeless and tender story of young male friendships and the small, idyllic moments of happiness that can illuminate the darkness of war.

Hubert Mingarelli is the author of numerous novels and short story collections, as well as fiction for young adults. His novel A Meal in Winter was shortlisted for the 2014 Independent Foreign Fiction Prize and was selected by Indies Introduce in the United States. He lives in Grenoble. Sam Taylor (translator) is an acclaimed translator and novelist who lives in Texas. His translations include A Meal in Winter by Hubert Mingarelli (The New Press), Special Envoy by Jean Echenoz (The New Press), The Arab of the Future by Riad Sattouf, and the award-winning HHhH by Lauren Binet.
Loading...
or support indie stores by buying on