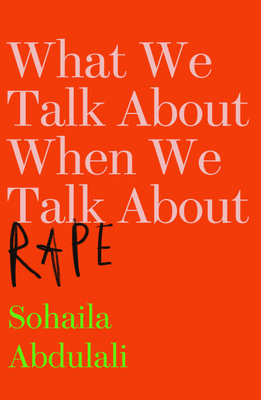 “What We Talk About When We Talk About Rape is a public square for those who know a lot about rape and for those who know little. It is a safe space for survivors and a broad-minded attempt to open the conversation to everyone. It’s a global book, relevant in refugee camps and American suburbs. I can’t think of a book to compare it to. Maybe Silent Spring or Unsafe at Any Speed. I hope the world is ready to accept the change this book could bring.”
— Sarah McNally, McNally Jackson Books, New York, NY
View the List

What We Talk About When We Talk About Rape is brilliant, frank, empowering, and urgently necessary. Sohaila Abdulali has created a powerful tool for examining rape culture and language on the individual, societal, and global level that everyone can benefit from reading.
--Jill Soloway

In the tradition of Rebecca Solnit, a beautifully written, deeply intelligent, searingly honest--and ultimately hopeful--examination of sexual assault and the global discourse on rape told through the perspective of a survivor, writer, counselor, and activist

After surviving gang-rape at seventeen in Mumbai, Sohaila Abdulali was indignant about the deafening silence that followed and wrote a fiery piece about the perception of rape--and rape victims--for a women's magazine. Thirty years later, with no notice, her article reappeared and went viral in the wake of the 2012 fatal gang-rape in New Delhi, prompting her to write a New York Times op-ed about healing from rape that was widely circulated. Now, Abdulali has written What We Talk About When We Talk About Rape--a thoughtful, generous, unflinching look at rape and rape culture.

Drawing on her own experience, her work with hundreds of survivors as the head of a rape crisis center in Boston, and three decades of grappling with rape as a feminist intellectual and writer, Abdulali tackles some of our thorniest questions about rape, articulating the confounding way we account for who gets raped and why--and asking how we want to raise the next generation. In interviews with survivors from around the world we hear moving personal accounts of hard-earned strength, humor, and wisdom that collectively tell the larger story of what rape means and how healing can occur. Abdulali also points to the questions we don't talk about: Is rape always a life-definining event? Is one rape worse than another? Is a world without rape possible?

What We Talk About When We Talk About Rape is a book for this #MeToo and #TimesUp age that will stay with readers--men and women alike--for a long, long time.

Sohaila Abdulali was born in Mumbai. She has a BA from Brandeis University in economics and sociology and an MA from Stanford University in communication. She is the author of two novels as well as children's books and short stories. She lives in New York with her family.
Loading...
or support indie stores by buying on