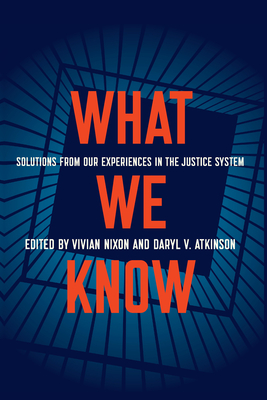 What We Know (Hardcover)

Solutions from Our Experiences in the Justice System

A thoughtful and surprising cornucopia of ideas for improving America's criminal justice system, from those most impacted by it

When The New Press, the Center for American Progress, and the Formerly Incarcerated and Convicted Peoples and Family Movement issued a call for innovative reform ideas, over three hundred currently and formerly incarcerated individuals responded. What We Know collects two dozen of their best suggestions, each of which proposes a policy solution derived from their own lived experience.

Ideas run the gamut: A man serving time in Indiana argues for a Prison Labor Standards Act, calling for us to reject prison slavery. A Nebraska man who served a federal prison term for white-collar crimes suggests offering courses in entrepreneurship as a way to break down barriers to employment for people returning from incarceration. A woman serving a life sentence in Georgia spells out a system of earned privileges that could increase safety and decrease stress inside prison. And a man serving a twenty-five-year term for a crime he committed at age fifteen advocates powerfully for eliminating existing financial incentives to charge youths as adults.

With contributors including nationally known formerly incarcerated leaders in justice reform, twenty-three justice-involved individuals add a perspective that is too often left out of national reform conversations.

The Reverend Vivian Nixon is executive director of College and Community Fellowship (CCF), a New York-based organization committed to removing barriers to higher education for women with criminal-record histories and their families Attorney Daryl Atkinson was the inaugural Second Chance Fellow for the U.S. Department of Justice, and is now the co-director of Forward Justice, a law, policy, and strategy center in Durham, North Carolina, dedicated to advancing racial, social, and economic justice in the United States.
or support indie stores by buying on
Copyright © 2020 American Booksellers Association