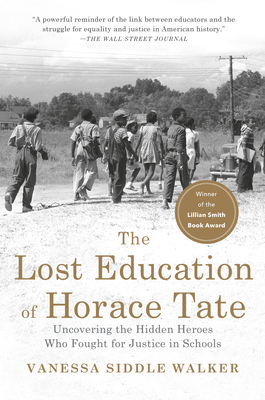 This well-told and inspiring story (Publishers Weekly, starred review) is the monumental product of Lillian Smith Book Award-winning author Vanessa Siddle Walker's two-decade investigation into the clandestine travels and meetings--with other educators, Dr. King, Georgia politicians, and even U.S. presidents--of one Dr. Horace Tate, a former Georgia school teacher, principal, and state senator. In a sweeping work that reads like a companion piece to 'Hidden Figures, ' (Atlanta Journal-Constitution), post-Brown generations will encounter invaluable lessons for today from the educators behind countless historical battles--in courtrooms, schools, and communities--for the quality education of black children.

For two years, an aging Tate told Siddle Walker fascinating stories about a lifetime advocating for racial justice in schools. On his deathbed, he asked her return to his office in Atlanta, where upon his passing she discovered an attic filled with a massive archive documenting the underground actors and covert strategies behind the most significant era of the fight for educational justice. Until now, the courageous tale of how black Americans in the South won so much and subsequently fell so far has been incomplete. The Lost Education of Horace Tate is a powerful reminder of the link between educators and the struggle for equality and justice in American history (The Wall Street Journal).

Vanessa Siddle Walker, a professor at Emory University, has studied the segregated schooling of African American children for more than twenty years. She is the president of the American Educational Research Association, a member of the National Academy of Education, a former Spencer fellow, and a recipient of the prestigious Grawemeyer Award in education. She lives near Atlanta.
Loading...
or support indie stores by buying on