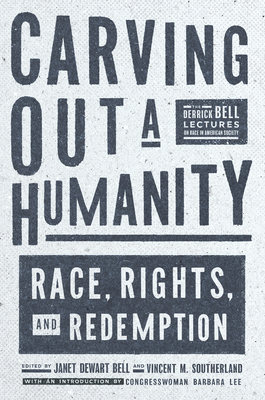 Carving Out a Humanity

Leading law professors weigh in on key issues in race and the law--collected in honor of one of the originators of critical race theory, Derrick Bell

When Derrick Bell, one of the originators of critical race theory, turned sixty-five, his wife set up a lecture series of the leading critical race theorists, many of them Bell's former students. Now, these lectures, given over the course of twenty-five years, are collected for the first time in Carving Out a Humanity, a volume that Library Journal calls "potent" and Kirkus Reviews, in a starred review, says "powerfully acknowledge s] the persistence of structural racism."

"To what extent does equal protection protect?" asks Ian Haney L pez in a penetrating analysis of the gaps that remain in our civil rights legal codes. Sherrilyn Ifill, president and director-counsel of the NAACP Legal Defense Fund, describes the hypersegregation of our cities and the limits of the law's ability to change deep-seated attitudes about race. Patricia J. Williams explores the legacy of slavery in the law's current constructions of sanity. Anita Allen discusses competing privacy and accountability interests in the lives of African American celebrities. Chuck Lawrence interrogates the judicial backlash against affirmative action. And Michelle Alexander describes what caused her to break ranks with the civil rights community and take up the cause of those our legal system has labeled unworthy.

Carving Out a Humanity gathers some of our country's brightest progressive legal stars in a volume that illuminates facets of the law that have continued to perpetuate racial inequality and to confound our nation at the start of a new millennium. According to Library Journal, "Scholars and lay readers alike will be enlightened and spurred to thought and discussion."

Janet Dewart Bell is a social justice activist with a doctorate in leadership and change from Antioch University. She founded the Derrick Bell Lecture on Race in American Society series at the New York University School of Law and is the author of Lighting the Fires of Freedom: African American Women in the Civil Rights Movement and Blackbirds Singing: Inspiring Black Women's Speeches from the Civil War to the Twenty-First Century and the co-editor (with Vincent M. Southerland) of Carving Out a Humanity and Race, Rights, and Redemption (all published by The New Press). An award-winning television and radio producer, she lives in New York City.Vincent M. Southerland is an assistant professor of clinical law and co-faculty director of the Center on Race, Inequality, and the Law at NYU Law. The co-editor (with Janet Dewart Bell) of Carving Out a Humanity and Race, Rights, and Redemption (The New Press), he lives in Brooklyn, New York.
Loading...
or
Not Currently Available for Direct Purchase