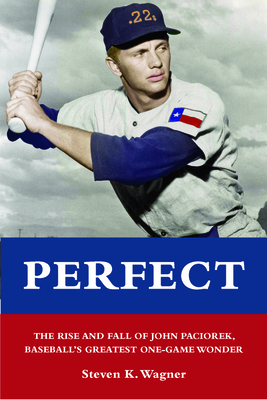 THE MAN WHO BATTED A THOUSAND
A spectacular debut major-league game--then obscurity.

On the final day of the 1963 major-league baseball season, Houston Colt .45s teen sensation John Paciorek--in his one and only big-league game--went three-for-three, giving him a career batting average of 1.000. He also notched three RBI and scored four times. In the outfield John played magnificently, cleanly fielding all four balls hit to him. His was, truly, a perfect game--the most spectacular game ever by a player in his only big-league appearance. Then, a back injury dropped him just as quickly back down to the minor leagues, where he soon departed from baseball forever.

A rare jewel of baseball history, Perfect tells John's remarkable story, from his childhood in Detroit, to athletic excellence in high school, to a solitary season in the low minors, to his one shining day in the majors and everything that followed. It includes excerpts from the play-by-play announcers watching his performance--Hall of Famer Ralph Kiner and Lindsey Nelson--and reflections from numerous outstanding major-league players who crossed paths with John that day, including Rusty Staub and Jim Wynn.

The big question remains: What might John Paciorek have become? His story is a fascinating one for anyone who loves the game of baseball: wonderful nostalgia for older fans, a bit of trivia brought fully to life, and a tantalizing story of hope and inspiration for young players aspiring to greatness.

STEVEN K. WAGNER has worked as a freelance journalist since 1989. The author began his career with the Monmouth Sun-Enterprise in Oregon and later worked for the Oregon City Enterprise-Courier and the Portland Daily Journal of Commerce before joining United Press International as a staff writer in Boise, Idaho. He also worked for the Portland Oregonian as its Vancouver, Washington, bureau chief and as the newspaper's night crime reporter. Mr. Wagner has freelanced extensively for the Los Angeles Times and his work also has appeared in the New York Times, Oklahoma City Oklahoman, Seattle Times, Baseball America, and numerous other newspapers and magazines. He is married, has two grown children, and currently resides in Claremont, California.
Loading...
or support indie stores by buying on