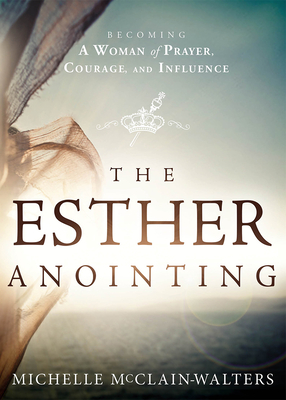 Be inspired by Esther, an incredible woman of God.
Esther was willing to risk her life for the welfare of her people and the furthering of God's plan. Strategically positioned by God in a place of influence, Esther is a powerful biblical example of how God can use anyone. She answered God's call and went through a season of preparation physically and spiritually to get ready.

Just like in biblical times, God is positioning women today and giving them divine opportunities to influence the culture for His glory. The Esther Anointing gives you the keys to Esther's success, including the qualities that make women great, the power of influence, and the key to finding God's favor for your assignment.

It doesn't matter where you came from or what skills and talents you have; if you let Him, God can use your life for His glory

Michelle McClain-Walters has traveled to more than 40 nations and has conducted schools of the prophet that have activated thousands in the art of hearing the voice of God. Michelle currently serves as director of prayer ministry on the staff of Crusaders Church under the leadership of Apostle John Eckhardt. She is also one of the house prophets and apostolic team leaders at Crusaders Church. She resides in the city of Chicago along with her beautiful daughter, Eboni. She is the author of The Prophetic Advantage.
Loading...
or support indie stores by buying on