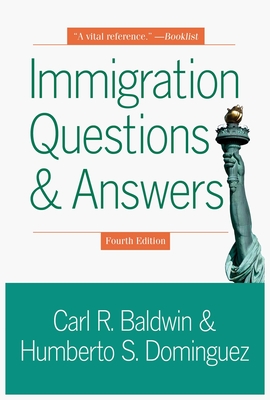 A Comprehensive, User-Friendly Guide for Anyone Planning to Live Temporarily or Permanently in the United States

The process of acquiring and retaining the right to visit or live in the United States is an interesting and complex subject. US immigration laws have not changed very much during the Trump administration, and yet the experience of immigrating to the United States has definitely been affected by it. In this concise primer, first conceived and designed as a how-to resource for would-be “green card” holders in the 1990s, the process of getting and keeping a visa is explained and updated in this new edition. In simple terms, the authors provide a breakdown of the most important topics in this area with useful examples. With over thirty years of experience practicing law, co-author Humberto S. Dominguez adds valuable insights and observations to this increasingly important topic. The road to legal residence in the United States can be a tricky and elusive endeavor. Immigration Questions & Answers, Fourth Edition, will guide you every step of the way, with a down-to-earth approach and invaluable advice. Chapters cover topics such as:
Persons who hope to visit or live in the United States and even lawyers unfamiliar with immigration law and practice will benefit from this basic guide. People facing particular difficulties in this area, who may ultimately need the assistance of an immigration lawyer, will also benefit from learning the bare essentials.

Carl R. Baldwin was an attorney who specialized in immigration law and a member of the American Civil Liberties Union, the Association of the Bar of the City of New York, and the American Immigration Lawyers Association. He worked closely with the Association of the Bar in advising foreign citizens who qualified for “amnesty” in the late 1980s and in training attorneys to represent Haitian asylum seekers in the early 1990s.

Humberto S. Dominguez has been practicing law for over thirty years, almost exclusively in the area of immigration. He obtained a bachelor’s degree in political science, graduating with summa cum laude distinction from Long Island University. He obtained his juris doctorate degree from Brooklyn Law School. Mr. Dominguez has been a member of the American Immigration Lawyers Association since 1994. For his work assisting Haitian asylum seekers, he was given the Tristram Walker Metcalfe Alumni Award from his alma mater, LIU. Over the years, he has participated in various speaking engagements and trainings and is a yearly participant as a judge in New York University School of Law’s immigration moot court competition. He lives in New York City.
Loading...
or
Not Currently Available for Direct Purchase