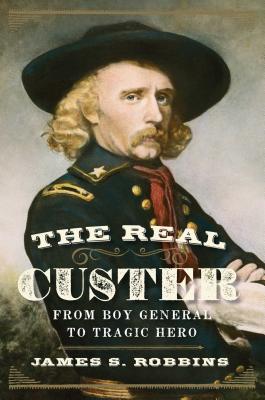 From Boy General to Tragic Hero

The Real Custer takes a good hard look at the life and storied military career of George Armstrong Custer—from cutting his teeth at Bull Run in the Civil War, to his famous and untimely death at Little Bighorn in the Indian Wars.

Author James Robbins demonstrates that Custer, having graduated last in his class at West Point, went on to prove himself again and again as an extremely skilled cavalry leader. Robbins argues that Custer's undoing was his bold and cocky attitude, which caused the Army's bloodiest defeat in the Indian Wars.

Robbins also dives into Custer’s personal life, exploring his letters and other personal documents to reveal who he was as a person, underneath the military leader. The Real Custer is an exciting and valuable contribution to the legend and history of Custer that will delight Custer fans as well as readers new to the legend.

James S. Robbins is Deputy Editor of Rare and Senior Fellow for National Security Affairs on the American Foreign Policy Council. He is the award-winning former Senior Editorial Writer for Foreign Affairs at the Washington Times, an author, political commentator and professor, with an expertise in national security, and foreign and military affairs. He served as special assistant in the Office of the Secretary of Defense. His books include This Time We Win: Revisiting the Tet Offensive (2010) and Last in Their Class: Custer, Pickett and the Goats of West Point (2006). Robbins is also a political commentator and contributing editor for National Review Online.
or
Not Currently Available for Direct Purchase
Copyright © 2020 American Booksellers Association