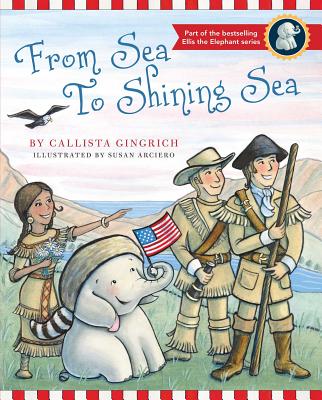 From Sea to Shining Sea (Ellis the Elephant #4)

Ellis the Elephant is back and ready for another adventure in American history! In From Sea to Shining Sea, the fourth installment of Callista Gingrich’s New York Times bestselling series, Ellis explores the early years of the United States and heads west into uncharted territory with Lewis and Clark.

In previous books, Sweet Land of Liberty, Land of the Pilgrims’ Pride, and Yankee Doodle Dandy, Ellis learned about pivotal moments that have shaped America. Now, in From Sea to Shining Sea, America’s favorite time-traveling pachyderm discovers a new and growing nation along with George Washington, Thomas Jefferson, Lewis and Clark, Sacagawea and others.

Authored by Callista Gingrich and illustrated by Susan Arciero, From Sea to Shining Sea will delight those who want to know how brave Americans forged a growing nation and spread freedom from coast to coast.

Susan Arciero is an award-winning illustrator of numerous children's books, including Hail to the Chief, Christmas in America, From Sea to Shining Sea, Yankee Doodle Dandy, Land of the Pilgrims' Pride, Sweet Land of Liberty, Nat, Nat the Nantucket Cat and Cornelius Vandermouse: The Pride of Newport. Growing up in Massachusetts and traveling the world as a member of a military family, Susan lives in Pinehurst, North Carolina, with her husband, three children, and two basset hounds.
Loading...
or
Not Currently Available for Direct Purchase