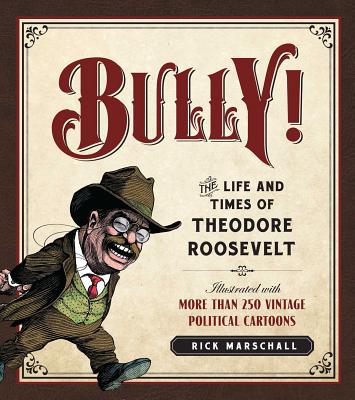 The Life and Times of Theodore Roosevelt: Illustrated with More Than 250 Vintage Political Cartoons

One of America’s most beloved presidents comes to life in this comprehensive, unique biography illustrated by more than 250 period cartoons.

Theodore Roosevelt, adored for everything from his much-caricatured teeth and glasses to his almost childlike exuberance and boundless energy, as well as his astounding achievements, captivated Americans of his day—and the cartoonists who immortalized him in their drawings. In Bully! The Life and Times of Theodore Roosevelt, author and cartoonist Rick Marschall tells Roosevelt’s story, using words and colorful images alike. Incorporating hundreds of vintage illustrations, Bully! captures Roosevelt’s remarkable life and incredible accomplishments as no other biography has.

In Bully! you will read and see why this man continues to capture the imaginations of Americans and those who love America. You will learn:

Rick Marschall, author or editor of more than sixty-five books, is a former political cartoonist and has written extensively on politics, history, and cartoons. Bostonia magazine calls him “perhaps America’s foremost authority on popular culture.” He has taught at Rutgers and the School of Visual Arts, and maintains the nation’s largest private collection of cartoon and comic art, popular and graphic-satire magazines, newspaper funnies, political cartoons, and original art. A lifelong Roosevelt scholar, he currently lives in Michigan.
Loading...
or
Not Currently Available for Direct Purchase