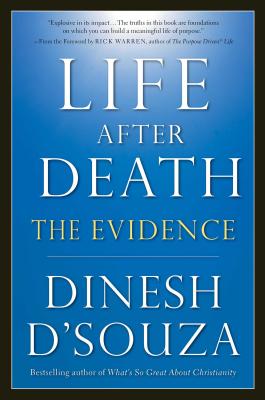 Unlike many books about the afterlife, Life after Death makes no appeal to religious faith, divine revelation, or sacred texts. Drawing on some of the most powerful theories and trends in physics, evolutionary biology, science, philosophy, and psychology, D'Souza shows why the atheist critique of immortality is irrational and draws the striking conclusion that it is reasonable to believe in life after death. He concludes by showing how life after death can give depth and significance to this life, a path to happiness, and reason for hope.

DINESH D'SOUZA has had a prominent career as a writer, scholar, public intellectual, and filmmaker. Born in India, D’Souza came to the U.S. as an exchange student at the age of 17 and graduated Phi Beta Kappa from Dartmouth College. The author of many bestselling books including America, The Big Lie, Death of a Nation, and United States of Socialism, he is also the creator of three of the top ten highest-grossing political documentaries ever made.
Loading...
or
Not Currently Available for Direct Purchase