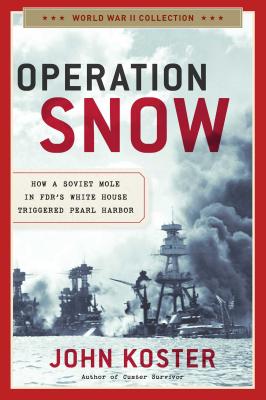 Americans have long debated the cause of the December 7, 1941 bombing of Pearl Harbor. Many have argued that the attack was a brilliant Japanese military coup, or a failure of U.S. intelligence agencies, or even a conspiracy of the Roosevelt administration. But despite the attention historians have paid to the bombing of Pearl Harbor, the truth about that fateful day has remained a mystery—until now. In Operation Snow: How a Soviet Mole in FDR’s White House Triggered Pearl Harbor, author John Koster uses recently declassified evidence and never-before-translated documents to tell the real story of the day that FDR memorably declared would live in infamy, forever. Operation Snow shows how Joseph Stalin and the KGB used a vast network of double-agents and communist sympathizers—most notably, Harry Dexter White—to lead Japan into war against the United States, demonstrating incontestable Soviet involvement behind the bombing of Pearl Harbor. A thrilling tale of espionage, mystery and war, Operation Snow will forever change the way we think about Pearl Harbor and World War II.

John Koster writes frequently on American history. He is the author of The Road to Wounded Knee, which won the Sigma Delta Chi award for distinguished public service, and Custer Survivor, and has written for many historical publications, including Military History, American Heritage, and American History. Koster, a U.S. Army veteran, is fluent in half a dozen languages, and lives in New Jersey with his wife Shizuko Obo, an award-winning children's author.
Loading...
or
Not Currently Available for Direct Purchase