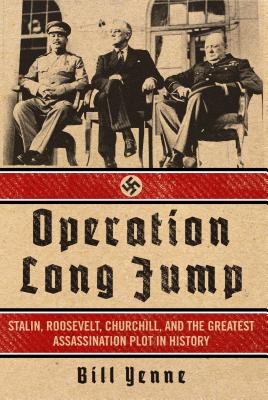 Stalin, Roosevelt, Churchill, and the Greatest Assassination Plot in History

In the middle of World War II, Nazi military intelligence discovered a seemingly easy way to win the war for Adolf Hitler. The three heads of the Allied forces—Franklin Roosevelt, Winston Churchill, and Josef Stalin—were planning to meet in Tehran in October, 1943. Under Hitler's personal direction, the Nazis launched “Operation Long Jump,” an intricate plan to track the Allied leaders in Tehran and assassinate all three men at the same time. “I suppose it would make a pretty good haul if they could get all three of us,” Roosevelt later said. Historian Bill Yenne retells the incredible, globe-spanning story of the most ambitious assassination plot ever thwarted in Operation Long Jump.

Bill Yenne is the author of more than three dozen books on military, aviation, and historical topics, including Operation Long Jump (2015) and Alexander the Great (2010). WWII History Magazine wrote that his book B-17 at War (2006) “is a source of unending pleasure to the Flying Fortress fan,” and Air Force Magazine noted that his primer on strategic air power “deserves a place on any airman’s bookshelf.” He has contributed to encyclopedias of both world wars, and has appeared in documentaries airing on the History Channel, the National Geographic Channel, the Smithsonian Channel and ARD German Television. A graduate of the University of Montana and the Stanford University Professional Publishing Course, Yenne is also the founder of American Graphic Systems.
Loading...
or
Not Currently Available for Direct Purchase