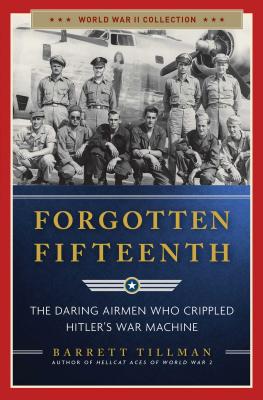 In his new book, The Forgotten Fifteenth: The Daring Airmen Who Crippled Hitler’s War Machine, Tillman brings into focus a seldom-seen multinational cast of characters, including pilots from Axis nations Romania, Hungary, and Bulgaria and many more remarkable individuals. They were the first generation of fliers—few of them professionals—to conduct a strategic bombing campaign against a major industrial nation. They suffered steady attrition and occasionally spectacular losses. In so doing, they contributed to the end of the most destructive war in history.

The Forgotten Fifteenth is the first-ever detailed account of the Fifteenth Air Force in World War II and the brave men that history has abandoned. This book is a must-read for military history enthusiasts, veterans, current servicemen and their families. Includes glossy photo signature of historic pictures and documents

Barrett Tillman is the author of Whirlwind, Forgotten Fifteenth, and dozens of other military histories. He is a familiar television commentator on The History Channel and National Geographic Channel. The Wall Street Journal hailed him as “a master story teller,” and Pulitzer Prize–winner Stephen Hunter called Whirlwind “a miracle of military history.” Tillman’s work has been cited in dozens of history books and has been used as course work by the Air Force, the Navy, and Marine Corps. Barrett Tillman lives in Arizona with his wife Sally.
Loading...
or
Not Currently Available for Direct Purchase