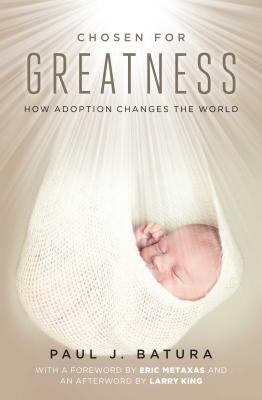 How Adoption Changes the World

The history of adoption is the history of the world itself. Children taken in by new families have grown up to dramatically reshape the world in ways most of us do not fully appreciate.

Chosen for Greatness profiles 16 well-known adoptees who were given the opportunity to change history for the better when they were taken in by their new families. Their contributions and accomplishments span the spectrum from science to sports, religion to entertainment, technology to politics. These adoptees didn't accomplish what they did in spite of being adopted; rather, it was their adoption that played a positive and critical role on the road to their success. This unique book is an inspiration for the hundreds of thousands of US families who adopt each year and will forever change the way everyone understands the incredible global tradition of adoption. With a foreword by Eric Metaxas and an afterword by Larry King.

His December 25, 2014 op-ed for The Wall Street Journal, titled "Science Increasingly Makes the Case for God," remains unofficially the most popular and shared piece in the paper’s history, garnering over 450,000 Facebook likes and 8,000 comments.
Loading...
or
Not Currently Available for Direct Purchase