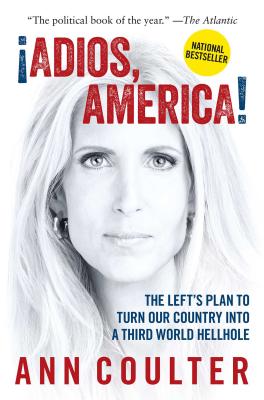 Ann Coulter is back, more fearless than ever. In Adios, America she touches the third rail in American politics, attacking the immigration issue head-on and flying in the face of La Raza, the Democrats, a media determined to cover up immigrants' crimes, churches that get paid by the government for their "charity," and greedy Republican businessmen and campaign consultants—all of whom are profiting handsomely from mass immigration that’s tearing the country apart. Applying her trademark biting humor to the disaster that is U.S. immigration policy, Coulter proves that immigration is the most important issue facing America today.

Ann Coulter is the author of eleven New York Times bestsellers. Coulter is the legal correspondent for Human Events and writes a popular syndicated column for the Universal Press Syndicate. She is a frequent guest on many TV shows, including The Kelly File, Fox and Friends, Good Day LA, The O'Reilly Factor, Hannity, and Real Time with Bill Maher, and has been profiled in numerous publications including the Guardian (UK), the New York Observer, National Journal, Harper's Bazaar, and Elle magazine. She was the April 25, 2005, cover story of TIME magazine. In 2001, Coulter was named one of the top 100 Public Intellectuals by federal judge Richard Posner.
Loading...
or support indie stores by buying on