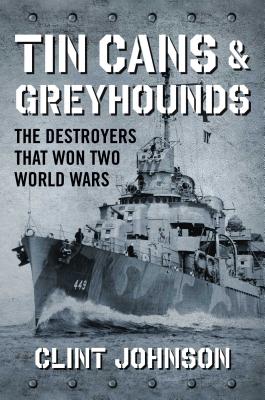 "Mr. Johnson has ... produced a technical history of destroyers as all-around naval weapons. Anyone interested in these ships will value his efforts." —The Wall Street Journal

For men on destroyer-class warships during World War I and World War II, battles were waged “against overwhelming odds from which survival could not be expected.” Those were the words Lieutenant Commander Robert Copeland calmly told his crew as their tiny, unarmored destroyer escort rushed toward giant, armored Japanese battleships at the Battle off Samar on October 25, 1944.

This action-packed narrative history of destroyer-class ships brings readers inside the half-inch-thick hulls to meet the men who fired the ships' guns, torpedoes, hedgehogs, and depth charges. Nicknamed "tin cans" or "greyhounds," destroyers were fast escort and attack ships that proved indispensable to America's military victories. Beginning with destroyers' first incarnation as torpedo boats in 1874 and ending with World War II, author Clint Johnson shares the riveting stories of the Destroyer Men who fought from inside a "tin can"—risking death by cannons, bombs, torpedoes, fire, and drowning.

The British invented destroyers, the Japanese improved them, and the Germans failed miserably with them. It was the Americans who perfected destroyers as the best fighting ship in two world wars. Tin Cans & Greyhounds compares the designs of these countries with focus on the old, modified World War I destroyers, and the new and numerous World War II destroyers of the United States.

Tin Cans & Greyhounds details how destroyers fought submarines, escorted convoys, rescued sailors and airmen, downed aircraft, shelled beaches, and attacked armored battleships and cruisers with nothing more than a half-inch of steel separating their crews from the dark waves.

Clint Johnson is an author and military historian whose books include The Politically Incorrect Guide to the South, Bull's-Eyes and Misfires: 50 Obscure People Whose Efforts Shaped the American Civil War, and Colonial America and the American Revolution.
Loading...
or
Not Currently Available for Direct Purchase