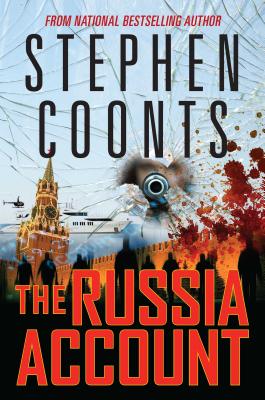 "The story moves along at a brisk pace, with plenty of intrigue, which will please thriller fans."—Booklist

"Since switching publishers a few years back, Coonts has consistently delivered high-powered, conspiracy-laden political thrillers that are perfect for fans of Vince Flynn and Brad Thor."—Real Book Spy

Stephen Coonts, master of suspense, has captivated readers around the world by writing thrillers ripped from the nation’s headlines.

His newest, The Russia Account, pits CIA officer Tommy Carmellini against a murderous international financial conspiracy that leaves a trail of death and corruption, extending from a small bank in Estonia to the highest reaches of the Kremlin and the halls of Congress—perhaps even to the CIA itself, putting Admiral Jake Grafton, the head of the CIA, in the crosshairs of an assassin.

Burglar-turned-CIA-warrior Tommy Carmellini has starred in eight previous Coonts thrillers. With the help of his mentor, Admiral Grafton, Carmellini has always managed to foil his enemies. Discovering and defeating the powerful forces behind this massive bloodstained financial conspiracy that threatens the very foundations of the United States government, and maybe the life of the president of the United States, will be his most difficult challenge yet—and perhaps, he suspects, an impossible one.

By turns thrilling, shocking, and even prophetic, The Russia Account is Coonts in top form. It is a reading experience not to be missed.

“Stephen Coonts’ newest thriller, The Russia Account, reads like ‘the story behind the story’ in our daily headlines. If you wonder how Moscow’s ‘black-ops’ threaten American democracy, read this book. Just don’t start reading it in bed. You will surely lose a good night’s sleep.”
— —Lt. Col. Oliver North, USMC (ret.), host of American Heroes on NRATV and bestselling author

“A crooked secretary of state plotting to be president, a dossier designed to smear her opponent, shady uranium sales to Russia, demands for impeachment, corrupt government officials, and a diabolical conspiracy to destroy America. Stephen Coonts has taken the threads of our present-day scandal and woven a dazzling novel of suspense. He is the master of thrillers.”
— —Gregg Jarrett, Fox News legal analyst and commentator and bestselling author of The Russia Hoax

Stephen Coonts is one of America’s greatest thriller writers. A former naval aviator and Vietnam combat veteran, he is the author of The Assassin, The Disciple, Liberty’s Last Stand, The Armageddon File, and sixteen national bestsellers including Flight of the Intruder, which was made into a major motion picture. A graduate of West Virginia University and the University of Colorado School of Law, Coonts resides in Colorado with his wife.
Loading...
or support indie stores by buying on