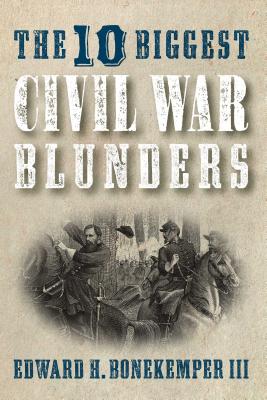 What makes the Civil War so fascinating is that it presents an endless number of "what if" scenarios—moments when the outcome of the war (and therefore world history) hinged on a single small mistake or omission.

In this book, Civil War historian Edward Bonekemper highlights the ten biggest Civil War blunders, focusing in on intimate moments of military indecision and inaction involving great generals like Robert E. Lee, Ulysses S. Grant, and William T. Sherman as well as less effective generals such as George B. McClellan, Benjamin Butler, and Henry W. Halleck. Bonekemper shows how these ten blunders significantly affected the outcome of the war, and explores how history might easily have been very different if these blunders were avoided.

Edward Henry Bonekemper III is a military historian, teacher, and writer. Bonekemper writes frequently about slavery, the American Civil War, and Union and Confederate generals.
Loading...
or
Not Currently Available for Direct Purchase