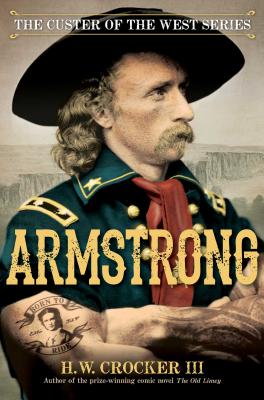 Armstrong (Custer of the West Series #1)

"Droll satire, this is the West as it might have been if the Sioux hadn't saved us." —STEPHEN COONTS, bestselling author of Flight of the Intruder and Liberty's Last Stand

"Crocker has created a hilarious hero for the ages."—ROB LONG, Emmy and Golden Globes nominated screenwriter and co-executive producer of Cheers

"A hilarious adventure."  —The American Spectator

"If you like learning history while laughing, you'll like this book...marvelous satire."  — DAVID LIMBAUGH, bestselling author of Jesus is Risen, The True Jesus and The Great Destroyer: Barack Obama's War on the Republic

What if Custer survived the Battle of the Little Bighorn?

What if he became a gun-for-hire?

And what if he made common cause with a troupe of cancan dancers, Chinese acrobats, an eyepatch-wearing rebel cardsharp, and a multilingual Crow scout?

Eager to clear his name from the ignominy of his last stand - but forced to do so incognito, under the clever pseudonym Armstrong - Custer comes across evildoings in the mysterious Montana town of Bloody Gulch, which a ruthless Indian trader runs as his own personal fiefdom, with rumors of muder, slavery, and buried treasure.

Armstrong is a rip-roaring tale of action, adventure, and hilarity as the ridiculously handsome, astonishingly brave, and highly susceptible milk-drinking cavalryman travels through the untamed West.

The Custer of the West Series begins here — and it's a wild ride you won't want to miss.

Praise For Armstrong (Custer of the West Series #1)…

"The world has a new hero — actually an old hero reimagined — George Armstrong Custer, in this delightfully funny alternative history that's better, or at least happier, than the real thing."

"Droll satire, this is the West as it might have been if the Sioux hadn't saved us."
— STEPHEN COONTS, bestselling author of Flight of the Intruder and Liberty's Last Stand

"If Custer died for our sins, Armstrong resurrects him for our delight. Not just the funniest book ever written about an Indian massacre, but laugh out loud funny, period. The best historical comic adventure since George MacDonald Fraser's Flashman."
— PHILLIP JENNINGS, author of Nam-A-Rama and Goodbye Mexico

"Crocker has created a hilarious hero for the ages. Armstrong rides through the Old West setting right the wrongs, and setting wrong the rights, in a very funny cascade of satire, history, and even patriotism."
— ROB LONG, Emmy- and Golden Globes-nominated screenwriter and co-executive producer of Cheers

"I’ve thoroughly enjoyed Harry Crocker’s latest, a satirical alternative history about Michigan’s own George Armstrong Custer, simply and cleverly entitled Armstrong. In Crocker’s world, Custer survived a butchering by Crazy Horse at the Battle of Little Bighorn and has become a Victorian paladin and celebrity, doing everything over the top and then some more beyond the top. Crocker knows his history, so his anti-history is knock-down, pain in the stomach, hilarious."
— BRADLEY J BIRZER, the Russell Amos Kirk Chair in History at Hillsdale College and author of "In Defense of Andrew Jackson"

"This is the kind of book young people should want to read, which will challenge them and widen their horizons. It is part history, part humor, part drama, and all-around entertainment."
— JAMES ROBBINS, author of "Erasing America: Losing Our Future by Destroying Our Past."

"A good read with a wonderful premise.... It does make one think that George Armstrong Custer was a very good man in command during a horrific battlefield defeat."
— Defense.info

"If you like learning history while laughing, you'll like this book...marvelous satire."
— DAVID LIMBAUGH, #1 bestselling author of The True Jesus and The Great Destroyer: Barack Obama's War on the Republic

"The conservative novel of the year... Armstrong is a rollicking work of alternate history that doesn’t sacrifice accurate details or historical nuance for the sake of your entertainment.... Armstrong’s Custer is a hero to love and admire."
— GRACE HOUGHTON, The Conservative Book Club

"Crocker’s Custer, a milk-drinking, sharp-shooting master of disguises, takes us on a series of uproarious adventures in the persona of Armstrong.... Armstrong is an extraordinary hero— a military strategist, a courageous fighter and some sort of dog whisperer to boot. He’s also a dashing romantic with a knack for making women swoon....I’ll look forward to finding out where duty calls Armstrong next."
— The Washington Examiner

"A good, old-fashioned yarn....There is much to enjoy in Crocker's book."
— AUSTIN RUSE, American Greatness

"Action-packed and great for laughs... Fathers will love reading this book with their sons.  Patriots will love it, too.... Prepare to delight in American history and heroism, unencumbered by trigger warnings."
— The American Thinker

H. W. Crocker III is the bestselling author of the prize-winning comic novel The Old Limey and several nonfiction histories, including Don't Tread on Me, Robert E. Lee on Leadership, Triumph, The Yanks Are Coming, The Politically Incorrect Guide to the Civil War, and The Politically Incorrect Guide to the British Empire. His journalism has appeared in National Review, the American Spectator, the Washington Times, and many other outlets. Born and raised in San Diego, CA, Crocker currently lives on the site of a former Confederate encampment in Virginia.
Loading...
or
Not Currently Available for Direct Purchase