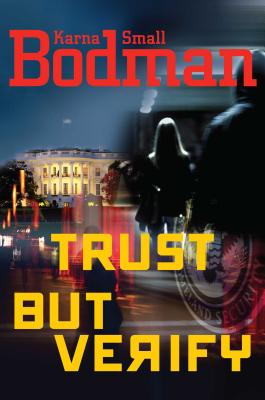 "Karna Bodman’s Trust But Verify is a riveting page-turner you won’t want to put down!"  - CARLA NEGGERS, bestselling author of Imposter's Lure

Samantha Reid, the brilliant Director of the White House Office of Homeland Security, is enjoying a rare evening away from Washington at a Florida charity ball when a bomb sends the well-heeled attendees stampeding into the night. Narrowly escaping the blast, Reid returns to the White House, where she has been trailing the massacres and illicit arms sales of a shadowy group of Russian oligarchs... all of whom want her dead. Caught in an ever-tightening spiral of lies and ruthless hitmen, Reid must race the clock against her assassins. But she's not alone. When FBI special agent Brett Keating discovers Samantha was the target of the Florida bomb, he resolves to protect her, while also unravelling a brazen plot that threatens the lives of international financial leaders and stock markets worldwide.

Praise For Trust But Verify…

"The reason Trust But Verify feels like it was written by someone 'in the room' is that Karna Bodman was 'in the room.' All too real and bursting with authenticity."
— Andrew Gross, New York Times bestselling author of The Blue Zone, Don't Look Twice, and The Dark Tide

"Trust but Verify by Karna Small Bodman is un-put-downable. With her deep background and rich writing skills, Bodman has become a maestra of political suspense. Her new thriller is a cauldron of intrigue laced with authentic insider details that give one chills."
— Gayle Lynds, New York Times bestselling author of The Assassins

"Bodman's insider knowledge lends her books a realism rare in the genre. Trust But Verify is a compulsive tale about a new threat from an age-old enemy."
— Kyle Mills, New York Times bestselling author of the Vince Flynn Mitch Rapp series

Karna Bodman served as White House Deputy Press Secretary under President Ronald Reagan and was subsequently appointed as Senior Director and spokesman for the National Security Council. She attended arms control talks with the Soviets and traveled with the team that briefed the leaders of Great Britain, France and Italy as well as Pope John Paul II. When Karna left The White House to become Senior Vice President of a Public Affairs firm, she was the highest ranking woman on The White House staff. Karna's thrillers include CASTLE BRAVO, CHECKMATE, GAMBIT, FINAL FINESSE,and her short story, THE AGENT.  Her next thriller is titled, TRUST BUT VERIFY. She is married to Dick Bodman and they maintain homes in Naples, Florida, Washington, D.C. and Rancho Santa Fe, CA.
Loading...
or
Not Currently Available for Direct Purchase