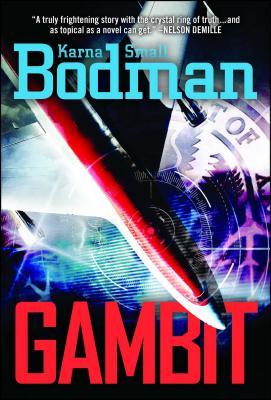 “A truly frightening story with the crystal ring of truth and authenticity; well written, well plotted and as topical as a novel can get.” —Nelson DeMille, New York Times bestselling author

“Not only does Bodman know the White House inside and out, she also knows how to tell a gripping, fast-paced tale of political intrigue filled with the kind of delicious insider detail most other novelists have to make up.” —Joseph Finder, New York Times bestselling author

“A nail-biter…You will not turn out the lights until you have read through to the last page.”      —The Washington Times

“Bodman’s insider knowledge of government operations and the scary plausibility of the story line make this worth reading.” —Library Journal


In this second book of the White House national security thriller series, Dr. Cameron Talbot, a famous expert on missile defense systems, returns to investigate how American airplanes could plummet from the sky—though nothing shows up on radar and none of the usual terrorist suspects have claimed responsibility.

With the country in a panic and the economy taking a nose-dive, the beautiful scientist finds herself once again enmeshed in international plots as well as a romantic triangle in the highest levels of government.

Karna Bodman served as White House Deputy Press Secretary under President Ronald Reagan and was subsequently appointed as Senior Director and spokesman for the National Security Council. She attended arms control talks with the Soviets and traveled with the team that briefed the leaders of Great Britain, France and Italy as well as Pope John Paul II. When Karna left The White House to become Senior Vice President of a Public Affairs firm, she was the highest ranking woman on The White House staff. Karna's thrillers include CASTLE BRAVO, CHECKMATE, GAMBIT, FINAL FINESSE,and her short story, THE AGENT.  Her next thriller is titled, TRUST BUT VERIFY. She is married to Dick Bodman and they maintain homes in Naples, Florida, Washington, D.C. and Rancho Santa Fe, CA.
Loading...
or
Not Currently Available for Direct Purchase