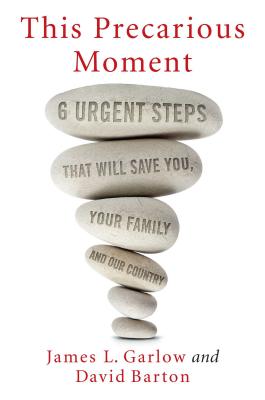 Six Urgent Steps that Will Save You, Your Family, and Our Country

America is at a crisis point, and its future depends on you.

In This Precarious Moment, Dr. Jim Garlow and evangelical political activist David Barton offer practical solutions to the six problems that plague our nation: racial strife, a massive immigration disaster, failure to understand Israel’s role in the world, how to reach millennials for Christ, a misunderstanding of the government’s role in religion and culture, and a church that has capitulated to culture.

Thankfully, there are steps we can take. Join Garlow and Barton as they equip Christians with the knowledge they need to take on today’s challenges during this precarious moment in American history.

He is the author of numerous books, including the bestseller Cracking Da Vinci’s Code, The Da Vinci CodeBreaker, Well Versed: Biblical Answers to Today’s Tough Questions, God And His People, A Christian’s Response to Islam, The Covenant, Partners in Ministry, The 21 Irrefutable Laws of Leadership Tested by Time, God Still Heals, The Blood Covenant, and The Secret Revealed. He coauthored Heaven and the Afterlife, Encountering Heaven and the Afterlife, Miracles Are For Real, and Real Life Real Miracles.

Garlow has served as the National Chairman of Pulpit Initiative, which spearheads the yearly Pulpit Freedom Sunday – a movement involving pastors across America – in conjunction with the Alliance Defending Freedom, an alliance of 2,200 attorneys focused on religious freedom issues.

Jim and his wife Rosemary have eight children, seven grandsons and two granddaughters.

David Barton is an evangelical Christian political activist and author. He is the founder of WallBuilders, LLC, a Texas-based organization dedicated to presenting America’s forgotten history and heroes, with an emphasis on the moral, religious, and constitutional foundation on which America was built.
Loading...
or
Not Currently Available for Direct Purchase