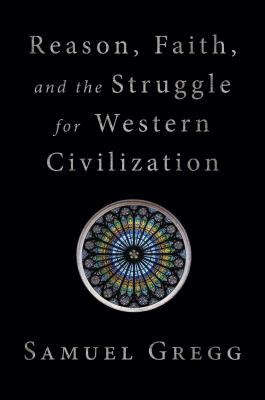 Reason, Faith, and the Struggle for Western Civilization

"Gregg's book is the closet thing I've encountered in a long time to a one-volume user's manual for operating Western Civilization." —The Stream

"Reason, Faith, and the Struggle for Western Civilization offers a concise intellectual history of the West through the prism of the relationship between faith and reason." —Free Beacon

The genius of Western civilization is its unique synthesis of reason and faith. But today that synthesis is under attack—from the East by radical Islam (faith without reason) and from within the West itself by aggressive secularism (reason without faith). The stakes are incalculably high.

The naïve and increasingly common assumption that reason and faith are incompatible is simply at odds with the facts of history. The revelation in the Hebrew Scriptures of a reasonable Creator imbued Judaism and Christianity with a conviction that the world is intelligible, leading to the flowering of reason and the invention of science in the West. It was no accident that the Enlightenment took place in the culture formed by the Jewish and Christian faiths.

We can all see that faith without reason is benighted at best, fanatical and violent at worst. But too many forget that reason, stripped of faith, is subject to its own pathologies. A supposedly autonomous reason easily sinks into fanaticism, stifling dissent as bigoted and irrational and devouring the humane civilization fostered by the integration of reason and faith. The blood-soaked history of the twentieth century attests to the totalitarian forces unleashed by corrupted reason.

But Samuel Gregg does more than lament the intellectual and spiritual ruin caused by the divorce of reason and faith. He shows that each of these foundational principles corrects the other’s excesses and enhances our comprehension of the truth in a continuous renewal of civilization. By recovering this balance, we can avoid a suicidal winner-take-all conflict between reason and faith and a future that will respect neither.

Praise For Reason, Faith, and the Struggle for Western Civilization…

“Samuel Gregg poses the only question that matters: Can the West survive? It can, he concludes, but only by resorting to the radical measure of becoming, once again, itself. This book is a trumpet blast, calling an entire civilization to arise as from a trance—to true ‘wokeness.’ A magnificent achievement.” —Peter Robinson, former speechwriter to President Reagan and Murdoch Distinguished Policy Fellow at the Hoover Institution

“Understanding Western civilization’s present crisis involves grasping how and why the separation of reason and faith has left the West adrift. In this powerful book, Samuel Gregg shows that restoring faith and reason—fides et ratio—to their proper place is essential if the West is to rediscover itself and draw upon the best of its religious heritage and the Enlightenment’s achievements.” —James V. Schall, S.J. (1928-2019), professor emeritus, Georgetown University

“Samuel Gregg has put us all in his debt by recalling us to the fundamental truth—once obvious—that reason without faith is sterile. Reason, Faith, and the Struggle for Western Civilization is a masterly inquiry into what has made what we call ‘the West’ the dynamo that changed the world. The answer cannot be found in political innovation or technological prowess alone, but also involves a recognition of that horizon of transcendence that grounds reason and the whole Enlightenment project. This is a deep and authoritative inquiry into the resources that our civilization requires to succeed but which are everywhere under siege. Anyone who cares about the future of Western civilization should read this.” —Roger Kimball, editor and publisher, The New Criterion


“If you think ‘Enlightenment’ means only science, if you think Western civilization is only about politics and economics, or if you think faith and reason cannot coexist, then you need to read this book. What gave rise to the West, Samuel Gregg argues, was not just science, politics, or economics, but a vision of the human person that did not separate but integrated faith and reason. Gregg shows the way out of our spreading ‘pathologies of reason and faith,’ demonstrating the true nature, and limitations, of reason, its deep connection to faith, and their complementary roles. The benefits of Western civilization can be realized in no other way. Gregg shows us how they might be preserved not only for us but for future generations.” —James R. Otteson, Thomas W. Smith Presidential Chair in Business Ethics, professor of economics at Wake Forest University

“Faith and reason form the foundation of the optimistic outlook in Samuel Gregg’s book. He shows how reason unmoored in faith and faith detached from reason easily drift into forms of unequal treatment, denying our creation in the image of God, which anchors us in hope. From Genesis to Paul, Gregg shows that the arrow is from Truth to Freedom, through logos to ‘enlightenment.’ The West has flourished in this freedom. May it never be lost.” —Vernon L. Smith, 2002 Nobel laureate in Economics, Chapman University

“Samuel Gregg has written a clear, eloquent, and concise guide to the intellectual and spiritual currents, rooted in reason and faith, which inform Western civilization at its best. He does full justice to the West’s Jewish and Christian roots and their affirmation of reason’s ability to articulate freedom’s purposes. He also lauds the best currents of Enlightenment thought even as he warns against the ‘forces of destruction’ that increasingly impel the modern world toward tyranny and a soul-destroying nihilism. With impressive learning and grace, he shows his readers ‘a way back’ to the old verities that point the way toward a promising future. A must-read for all who care about the fate of a Western civilization rooted in truth and liberty.” —Daniel J. Mahoney, Assumption College, author of The Idol of Our Age: How the Religion of Humanity Subverts Christianity

SAMUEL GREGG, the research director at the Acton Institute in Grand Rapids, Michigan, writes and speaks on questions of political economy, economic history, ethics in finance, and natural law theory. He holds D.Phil. in moral philosophy and political economy from the University of Oxford. His previous books include For God and Profit: How Banking and Finance Can Serve the Common Good and Becoming Europe.
Loading...
or support indie stores by buying on
(This book is on backorder)