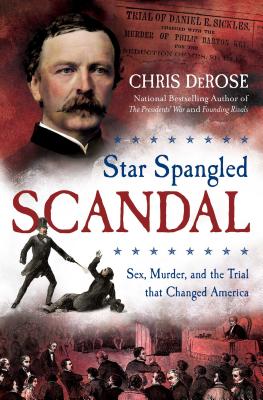 Sex, Murder, and the Trial that Changed America

"True crime fans will relish this thoughtful look at a murder and its aftermath that riveted a nation."

"There may be no two more addicting topics to people right now than politics and true crime. Star Spangled Scandal delves into both of these—with a heavy dose of sex added in."

“… and sir I do assure you he has as much the use of your wife as you have.”

— From an anonymous note delivered to Congressman Daniel Sickles on February 24, 1859

It is two years before the Civil War, and Congressman Daniel Sickles and his lovely wife Teresa are popular fixtures in Washington, D.C. society. Their house sits on Lafayette Square across from White House grounds, and the president himself is godfather to the Sickles’ six-year-old daughter. Because Congressman Sickles is frequently out of town, he trusts his friend, U.S. Attorney Philip Barton Key—son of Francis Scott Key—to escort the beautiful Mrs. Sickles to parties in his absence. Revelers in D.C. are accustomed to the sight of the congressman’s wife with the tall, Apollo-like Philip Barton Key, who is considered “the handsomest man in all Washington society… foremost among the popular men of the capital.”

Then one day an anonymous note sets into motion a tragic course of events that culminates in a shocking murder in broad daylight in Lafayette Square.

This is the riveting true story of the murder and trial that sparked a national debate on madness, male honor, female virtue, fidelity, and the rule of law. Bestselling author Chris DeRose (The Presidents’ War) uses diary entries, letters, newspaper accounts, and eyewitness testimonies to bring the characters to thrilling life in this antebellum true crime history.


Praise For Star Spangled Scandal: Sex, Murder, and the Trial that Changed America…

“Chris DeRose has written a wonderfully entertaining book about a long forgotten and quite amazing episode in our history. Star Spangled Scandal captures the mania surrounding the scandalous murder and trial that became America’s first true crime obsession.”
— Dan Abrams

"A riveting tale of a legendary murder trial set against the backdrop of a nation coming apart at the seams. DeRose's narrative couldn't be more timely in reflecting the harsh partisan feelings, the celebrity culture, and the shocking violence of the era. He reminds us how Washington scandals first enflamed the public, and still captivate us today."
— J.D. Dickey

Chris DeRose is a bestselling author, former law professor, and a public official in Arizona, currently serving as Maricopa County Clerk of the Superior Court. He is the author of Founding Rivals: Madison vs. Monroe, the Bill or Rights, and the Election that Saved a Nation, The Presidents’ War, and Congressman Lincoln: The Making of America’s Greatest President.
Loading...
or
Not Currently Available for Direct Purchase