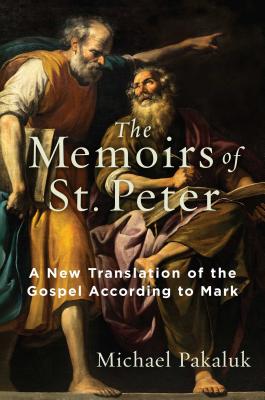 The Memoirs of St. Peter

A New Translation of the Gospel According to Mark

"A fresh, vigorous new translation of the Gospel of Mark."—The American Conservative

"Professor Pakaluk provides not only a thrilling new rendering of the ancient Greek text but also provides lively scholarship in the commentary that follows his translation of Mark's sixteen chapters."—The Catholic Thing

"This is a very rewarding version of Mark, and even those who have made long study of the text will find a wise and sensitive guide in Michael Pakaluk."—National Catholic Register

"Pakaluk's translation and commentary offers us a wonderful way to immerse ourselves anew..."—The B.C. Catholic

"Like his translation, Pakaluk's notes do a lot to bring St. Mark and his gospel alive for us."—Aleteia

The Gospel as You Have Never Heard It Before...

At a distance of twenty centuries, the figure of Jesus of Nazareth can seem impossibly obscure—indeed, some skeptics even question whether he existed. And yet we have an eyewitness account of his life, death, and resurrection from one of his closest companions, the Simon Bar-Jona, better known as the Apostle Peter.

Writers from the earliest days of the Church tell us that Peter’s disciple Mark wrote down the apostle’s account of the life of Jesus as he told it to the first Christians in Rome. The vivid, detailed, unadorned prose of the Gospel of Mark conveys the unmistakable immediacy of a first-hand account.

For most readers, however, this immediacy is hidden behind a veil of Greek, the language of the New Testament writers. Four centuries of English translations have achieved nobility of cadence or, more recently, idiomatic accessibility, but the voice of Peter himself has never fully emerged. Until now.

In this strikingly original translation, atten- tive to Peter’s concern to show what it was like to be there, Michael Pakaluk captures the tone and texture of the sherman’s evocative account, leading the reader to a bracing new encounter with Jesus. The accompanying verse-by-verse commentary—less theological than historical—will equip you to experience Mark’s Gospel as the narrative of an eyewitness, drawing you into its scenes, where you will come to know Jesus of Nazareth with new intimacy.

A stunning work of scholarship readily accessible to the layman, The Memoirs of St. Peter belongs on the bookshelf of every serious Christian.

Praise For The Memoirs of St. Peter: A New Translation of the Gospel According to Mark…

"Michael Pakaluk offers a fresh translation that captures the vivid narrative of Mark’s Gospel along with a running commentary based upon his own careful and thoughtful study.... I recommend it for anyone interested in mulling over the Gospel, especially those who are open to taking it seriously as though true."
— Scott Hahn

“Michael Pakaluk has produced a new and vivid translation which, together with his penetrating commentary, presents a narrative that is at once the most mysterious and the most true to life of the Gospels. This must surely be the definitive version of a great book—a book of astonishing literary power.”
— SIR ROGER SCRUTON

“Reading The Memoirs of St. Peter deepened my appreciation and enriched my understanding of the Gospel of Mark. It is a perfect companion that brings the verses of the gospel to life.”
— OBIANUJU EKEOCHA

“There are many Scripture commentaries and translations, but few that match the sharp intelligence and broad imagination of Michael Pakaluk’s.”
— ROBERT ROYAL

Michael Pakaluk, Ph.D., is Ordinary Professor of Ethics and Social Philosophy at the Catholic University of America in Washington, D.C. He earned his undergraduate and doctoral degrees at Harvard University and studied as a Marshall Scholar at the University of Edinburgh. An expert in ancient philosophy, he has published widely on Aristotelian ethics and the philosophy of friendship, as well as groundbreaking work in the ethics of accounting. His previous books include a translation of Books VIII and IX of the Nicomachean Ethics (Oxford) and a memoir, The Appalling Strangeness of the Mercy of God (Ignatius). He is married to Professor Catherine Pakaluk (also of CUA) and lives in Maryland.
Loading...
or support indie stores by buying on